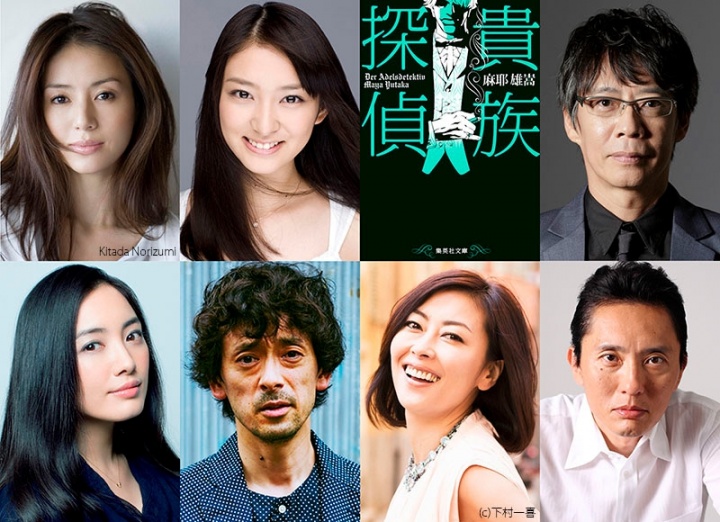 We get early confirmation for next season’s getsu9 drama! To mark its 30th anniversary, Arashi’s Aiba Masaki will be starring in the new drama “Kizoku Tantei” (The Aristocrat Detective) starting April. It is based on the novel of the same name published by Shueisha.

Check out the details of the drama and Aiba’s interview below.

Aiba plays a young man whose age, family, academic background, address, and even real name is unknown. He identifies himself as an aristocrat and does detective work as a hobby. He enjoys talking to women involved in the cases and professes that “entertaining a beautiful woman is an aristocrat’s entertainment”. He is gentlemanly in behavior and attends to “ladies first”.

He however leaves the actual investigations to his servants – Yamamoto (Matsushige Yutaka), maid Tanaka (Nakayama Miho) and chauffeur Sato (Takito Kenichi), as he delights in chatting with women. Rookie investigator Kotoku Aika (Takei Emi) finds herself on the same cases as as the aristocratic detective. She is repulsed by his way of doing things and scrambles to get ahead of him in solving cases.  Igawa Haruka plays Kitami Kiriko, Kotoku Aika’s mentor who inspired her to become an investigator.

After 15 years since “Home & Away” (2002), this will be Nakayama’s first appearance in a getsu9. She’ll be wearing a maid’s costume for the drama which will likely attract the attention of the viewers.

Aiba who is back to getsu9 after 2015’s “Yokoso, Wagaya e” for its 30th anniversary commented that he hasn’t played this type of role before, but thinks that he can enjoy playing this “attacking” role. He added that he is nervous because the servants of the aristocrat are truly amazing actors.