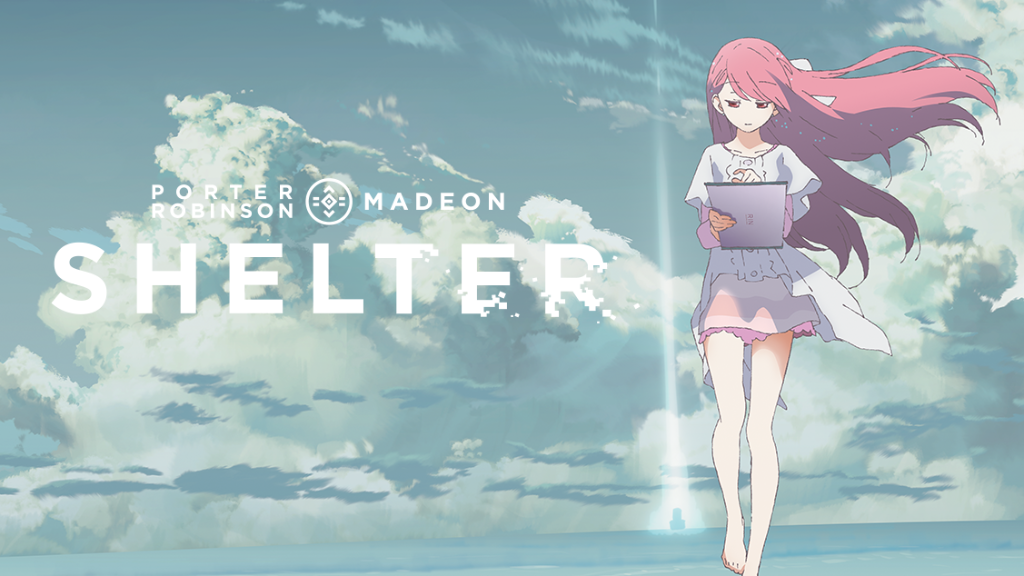 It was announced last weekend that A-1 Pictures, the animation studio behind some of the most loved and frowned upon TV Anime of the last decade (Anohana, The Idolmaster Cinderella Girls, Sword Art Online), has produced an animation short called “Shelter the Animation” for American electronic music producer, Porter Robinson. The short was uploaded to Porter Robinson’s official youtube channel 3 days ago as the music video for his—and fellow wunderkind Madeon—latest single, “Shelter”. It is simply sublime.

The 6-minute animation is loaded with breathtaking scenery and incredible animation, loosely set to a feel-inducing narrative and chill music. Watch the music video and its behind the scenes after the break!

The plot, as written on the official description:

Shelter tells the story of Rin, a 17-year-old girl who lives her life inside of a futuristic simulation completely by herself in infinite, beautiful loneliness. Each day, Rin awakens in virtual reality and uses a tablet which controls the simulation to create a new, different, beautiful world for herself. Until one day, everything changes, and Rin comes to learn the true origins behind her life inside a simulation.

Porter Robinson served as writer and executive producer to the project. Toshifumi Akai directed the project. Megumi Kouno was designated as the character designer by Porter himself, as revealed in an interview with Porter and Akai. Among with several others who worked on Shelter, the two worked together previously for the [email protected] anime series. Porter mentioned this as one of the reasons they are chosen, since his vision of Rin is a cute young girl, similar to [email protected] characters.

You may wonder how the American Producer could be so informed about the staffs of a pretty segmented TV anime, but familiar fans wouldn’t be surprised. In a past interview with Popspoken, Porter referred himself as a Japanophile, owing his brother for introducing him to the culture. The fascination also comes across quite clearly in his music, which feature a lot of vocaloid-inspired bits. Other than admitting the Dance Dance Revolution series as an inspiration, he—and curiously, Madeon—also cites Japanese Producer Yasutaka Nakata as a major influence. A collaboration with Japan is just long overdue.

Another key figure in realizing the collaboration is Crunchyroll. The Anime streaming platform introduced A-1 to Porter in last year’s Anime Expo and has been facilitating the project ever since. Crunchyroll uploaded the  official behind the scenes video yesterday, and it provides a lot of interesting details about the collaboration. In particular, Porter cites the project as “the most artistically fulfilling thing I’ve ever done”. On the other hand, A-1 Pictures President Tomonori Ochikoshi mentioned that Porter himself is the most interesting thing during the project.

More than being a wonderful piece of art, Shelter is yet another proof on how a cross-cultural project holds the potential to produce something extraordinary. With the Japanese entertainment industry slowly inching towards embracing the international in recent years, do you think we can look forward to other wonderful collaborations, Arama! readers? Also, let us know your thoughts on “Shelter”!