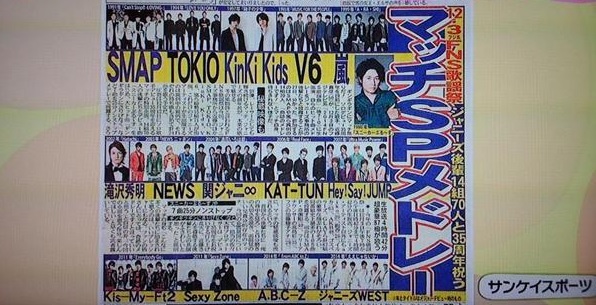 The 4th artist line up for Fuji TV’s music festival ‘2014 FNS Kayousai’ has been announced. All debuted groups under Johnny & Associates from SMAP to Johnnys West are participating in a 25 minute special medley for Masahiko Kondo’s 35th debut anniversary “Match SP”. In total, there will be 71 Johnny’s talents participating. 14 groups all together, singing 24 songs between them. The highlights would be the celebration planned for Matchy’s 35th Anniversary solo debut which falls on December 11. For this occasion, a special medley which includes his debut song “Sneaker Blues” and 7 of his greatest hit songs will be performed, as well as the groups’ respective hit songs.

The Johnnys will probably be in a different venue than the regular venue for the program since audience will be present.

Prior to the confirmation of any Johnnys participating in FUJI TV’s “2014 FNS Kayousai”, JFC (Johnnys Fan Club) members received an invite to apply for a “Special Programing”. The scheduled recording date and broadcast station coincided with Fuji TV’s FNS schedule, December 3 from 7pm. It was confirmed last November 28 that the said special program is for ‘2014 FNS Kayousai’