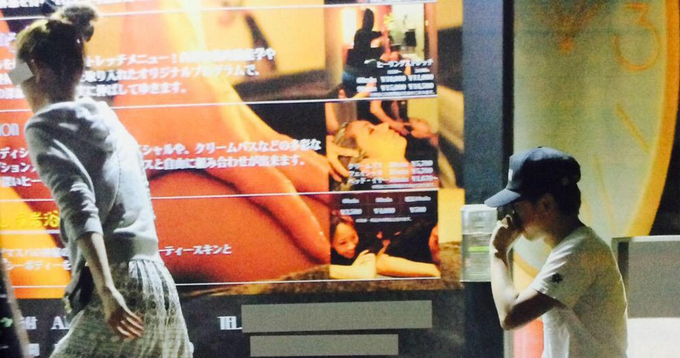 On Friday, September 4, just after 10:30 pm, Ohno Satoshi was spotted coming out of a spa by Japanese tabloid FRIDAY.

His group Arashi has hosted the “NHK Kouhaku Uta Gassen” for the last 5 years and sold over 30 million CDs.

For someone as busy as him, the leader of the group who is also active as an actor and artist, it might seem like his spa visit was but for stress relief.

However, when he came out of the establishment, a woman was holding on to him tightly. She is described as a slim beauty of about 170 cm. Her identity has been revealed to be former actress “A” (24) and Ohno’s current lover.

One of her acquaintances says, “A has acted in big projects like the Fuji TV drama “Life” and the movie “Real Onigokko 5″ but was not able to live off just her acting career. She worked part-time at a bar in Nishiazabu where she got along well with Ohno, who was a visitor to said bar. They have been dating for about a year. Because she likes painting as well, she has said things like ‘Our hobbies match!’ to brag about their relationship.”

The two of them enjoyed the sauna for about one and a half hours and then came out of the spa together, got into a taxi in a haste and drove to Ohno’s residence non-stop.

“The two of them moved in together as soon as they started dating. Currently, A has put her entertainment activities on hold and is working in their household, supporting Ohno who is very busy. The other day, she said that she was preparing bread for him a day before because he has to get up at 7 am” (same acquaintance)

With this and TOKIO’s Taichi Kokubun (41) getting married a few days ago, the Johnny & Associates tradition that “idols have to be single” is slowly dying.

Several days after their sauna date, the two have been spotted by Friday again. This time, they were seen visiting a high-class Yakiniku restaurant. Friday landed a direct hit on Ohno when he came out:

Friday reporter: “This is Friday. It seems like you are getting along very well with A.”
Ohno: “Huh? What?!”

The full dialog can be found in this week’s issue of FRIDAY.

Here are the paparazzi pictures that have been taken of them (click to enlarge): 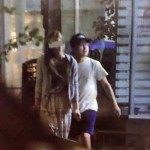 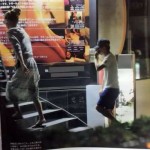 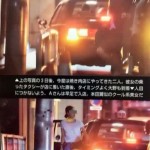