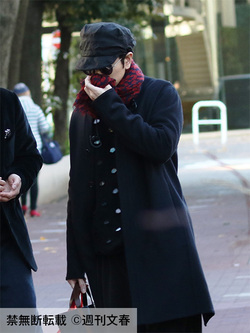 Recently, Shukan Bunshun has reported that Jun Matsumoto (33) has been frequently meeting with a woman in her 20s weekly. Allegedly the woman has been seen visiting the apartment that Jun shares with actress Mao Inoue (29) three times and she has been photographed. To make matters worse, this affair is said to have been going on for the last 4 years! Bunshun claims the two met through a mutual friend. From there, the two began a close relationship. The pair allegedly broke up once since their affair began in December of 2012 but the lovers just couldn’t be separated and got back together!

Naturally like any other celebrity caught in a scandal, Jun denies these claims and took a page out of Mariah Carey’s book claiming he doesn’t know her. He has directed any further questions to Johnny & Associates. Bunshun demanded fact checking from J&A but there was no response by the company by the time Bunshun published their piece. It is being alleged that the woman in question is Tsukasa Aoi (26).

So what do you think Arama? Is Jun cheating on a woman that he isn’t even confirmed to be dating? Do Jun and Inoue even like each other? Will there be another “wedding announcement” for the pair in the near future? Let us know in the comment section!