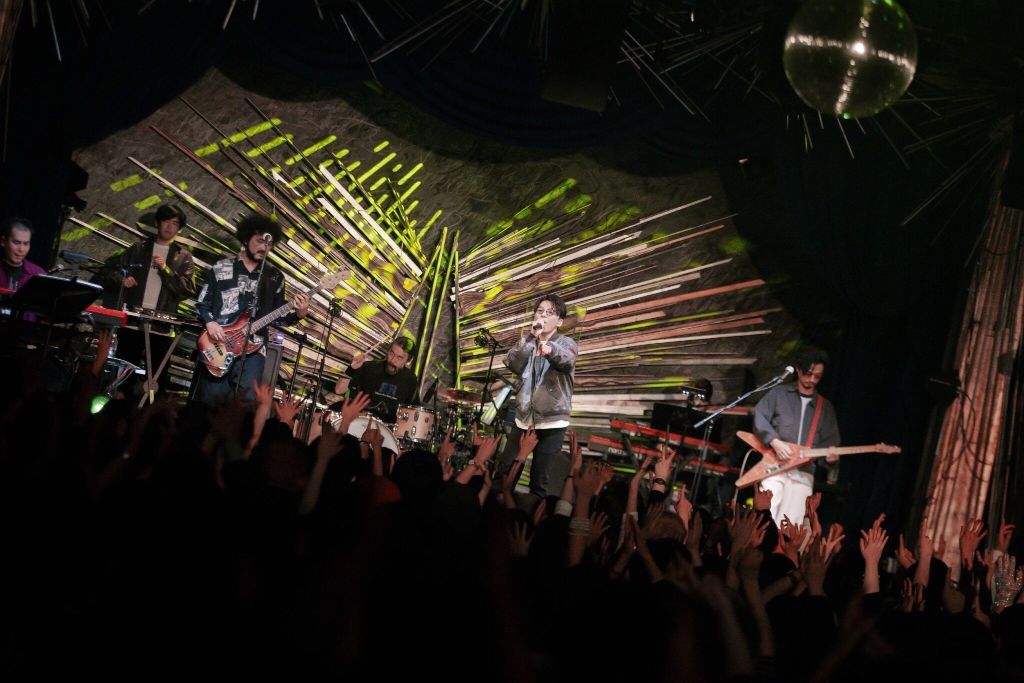 Last August, Hoshino Gen announced his international expansion plans, complete with multi-language social media accounts, worldwide streaming, and a world tour. His one tour stop outside of Asia, at New York’s Sony Hall, occurred last night. I attended the show, and while I enjoyed myself, I had several questions afterwards.

Sony Hall has become a favored venue for Japanese artists when they perform in New York, with Ken Hirai, MISIA, and Tokyo Ska Paradise Orchestra performing there recently. When I got to the 46th Street venue around 90 minutes before start time, I found that the line went down the street, snaking around 8th Avenue and onto 47th Street. I noticed something else about the line; with the exception of three people, all the attendees were Japanese. It was a similar situation when I attended MISIA’s concert this past spring.

But then I remembered something I discovered while trying to find ticket prices for the concert when it was first announced: there was a vacation package from Japan. Could this be the reason why the concert sold out so quickly after tickets went on sale?

I took my place in line and was joined a few minutes later by my friend Hannah (who some of you may know from Arama’s Discord as DefNotHannah). She too noticed that we were among almost entirely Japanese people.

The line moved rather swiftly and we soon found ourselves inside Sony Hall. That’s when the language barrier reared its head. There were no Japanese-speaking staff at the venue for a concert where the audience was virtually entirely Japanese. This resulted in people needlessly standing in line for the coat check when they were trying to get to the actual hall and standing in line for Gen’s merchandise when they were trying to get to the restroom. And about that merch! Who has a “cash only” merch shop in 2019?

As I surveyed the audience before the concert started, I noticed it was a crowd of Japanese people of all ages. Expat office workers, housewives, international university students, even some children. One fan was even dressed as Michael Jackson, complete with red “Thriller” jacket and one sparkly glove.

The lights dimmed exactly at the start time of 8 PM. Mark Ronson opened for Gen, performing a nearly 40 minute set that featured an array of guest vocalists, including King Princess, who performed on “Saturday Night Live” this past weekend.

In the space between Mark and Gen’s performances, there was an announcement that there was no photography or video recording allowed during Gen’s performance. I found this quite odd since we were in the US, not Japan. I found it even weirder that they made this announcement only in English, as if they were speaking to the ten of us who weren’t used to attending concerts in Japan primarily.

The lights dimmed again at 9 PM, illicting a series of wails from Gen’s female fans. After his band came on stage, Gen appeared, opening with “Pop Virus.” He was full of energy and he sounded exactly like the record. I noticed two of his backing band members immediately: Nagaoka Ryosuke and Miura Jungo of Petrolz. I had forgotten that Ryosuke was part of Gen’s band, and it struck me as funny that he performing in front of a giant crane-like light installation that recalled the crane symbol of his former band, Tokyo Jihen. I had a brief flashback to when I saw him last year in Osaka performing with his former bandmate, Shiina Ringo.

Gen did the obligatory “I love New York!” and thanked the audience for coming out. He also introduced his band. He did all of this in English, an impressive feat. But I had to ask “why?” Couldn’t he see that the crowd was nearly all Japanese?

I had checked the setlist for the Shanghai concert that occurred a mere two days earlier, so I had expectations as far as what he would play. I’m glad that he didn’t stick with that setlist, because he ended up playing what may very well be my favorite Japanese song of 2019, “Ain’t Nobody Know.” This is probably the most vocally challenging song in his catalog due to the falsetto, and he nailed it. I was in full gif mode, especially when Ryosuke had an extended guitar solo at the end.

Later in his set, Gen performed his breakthrough hit “SUN”, dedicating it to Michael Jackson. On cue, the guy cosplaying as Michael started waving his gloved hand in the air in an effort to get Gen’s attention.

After “SUN” ended, he said “This song is what I would call Japanese pop music.” He then performed “Koi.” Honestly, he’s not wrong in that statement, seeing as how “Koi” is one of the representative songs of JPop this decade. I was waiting for the climax of the song, the “Koi” dance, but it didn’t happen! During the dance break, just when I thought he was going to do it, he kinda just bopped around on stage. Luckily, the two housewives next to Hannah knew the whole dance.

Then came “Idea”, featuring some incredible beatmaking from STUTS and Gen’s middle finger at the audience.

Then it happened… Gen brought out a special guest, Orono Noguchi of Superorganism. I braced myself and warned Hannah of what was to come. Before starting “Same Thing”, the duo launched a volley of “fuck you” at the audience. I don’t know if they knew what they were saying, but I just looked at the 8 year old next to Hannah and winced.

Then they started the song… I’m all for Gen making songs in English and living his international pop star fantasy, but this ain’t it. Hannah had never heard the song in full after turning it off midway through out of fright upon its release, but now she was hearing it in full for the the first time. She was just as confused as I was the first time I heard it.

Gen closed his US debut with “Hello Song.” After he and his band walked off stage, the usual cries for an encore began. He appeared a few minutes, later followed by a staff member and Orono. What ensued for the next ten minutes seemed like something off a variety show. The staff member announced in English that there would be no encore, followed by Gen saying he had nothing left to play in Japanese. Then the staff member and Orono started hitting each as if they were in some comedy sketch. This was followed by more random banter between the three of them in Japanese, with someone in the audience shouting out “I love you!”, with him shouting it back at them, to the audience’s glee.

After 85 minutes, it was all over. Hannah complained that it felt more like a showcase than an actual concert due to the running time. One thing that stuck with me on the way home was, “Who is this for?” Was this concert for an American audience, a means for Gen to connect with his American fans, and possibly grow that audience? Or was it mediaplay, something that enabled him / his team to say that they had a soldout show in the US? The concert was filmed so maybe it will be used for this purpose?

When Gen’s international foray was announced, there was a mixed response. His management company, Amuse, has had international success with Perfume, BABYMETAL, and ONE OK ROCK. It would make sense to launch Gen internationally since he’s the company’s biggest star. But some remarked that he didn’t have that spark, that uniqueness, like those other acts to appeal internationally. He was too ordinary, free of gimmicks. It marked something that has become more prominent this decade, the divide between what is popular in Japan and what appeals internationally.

There have been more and more Japanese acts of all varieties performing internationally this decade. Some have a primarily foreign audience, some have a primarily Japanese one, while others strike a balance between the two. The acts are coming here though, and as long as they do, I will show up.