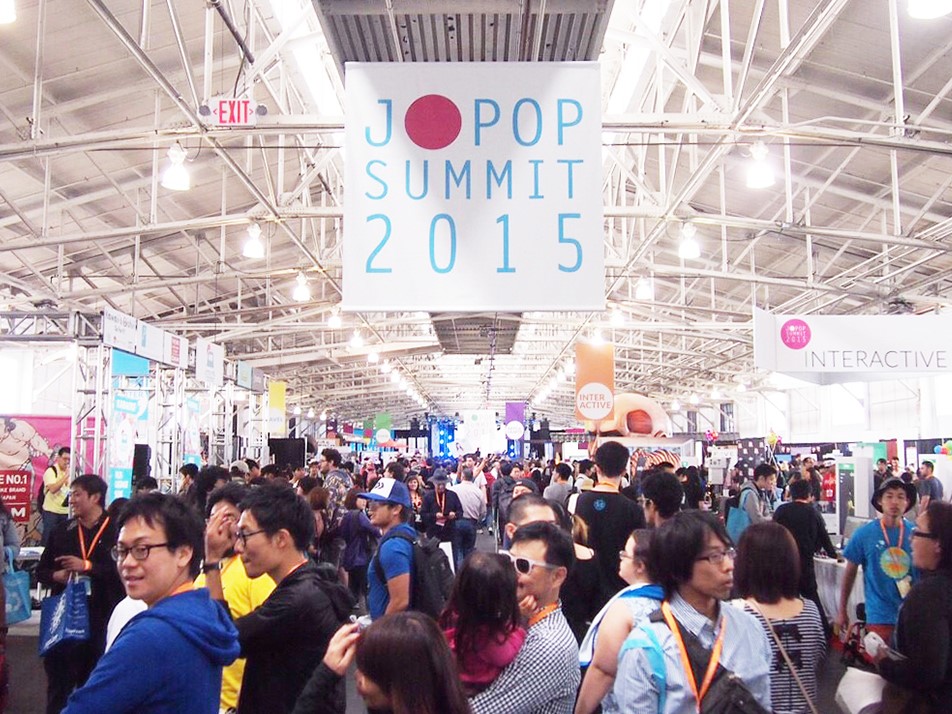 A few weeks ago, we had the chance to check out the J-POP SUMMIT in San Francisco.

The festival, which started as a street festival in San Francisco’s Japan Town  moved from Japan Town to the Fort Mason Center this year,  and took on a much more convention-like feel rather than a street festival. They expanded the festival to cover everything from music, anime, and art, to travel, tech, and fashion. They even had an outdoor food truck area with the most delicious food trucks lined up!

Here’s a recap of some of the cool things we saw during the J-POP weekend!

First I should probably mention how great the line-up of this festival was this year. They had a really diverse lineup of artists including, Eir Aoi, JAM Project, Anamanaguchi, to name a few,  as well as punk rockers Akabane Vulgars on Strong Bypass, and JinnyOops! along with a few Moshi Moshi Nippon artists including Anna Yano, Musubizm, and AMIAYA. They also had our favorite mannequin duo FEMM! (Check out the full line-up here.)

Speaking of FEMM, they were everywhere! I spotted them at a clothing booth handing out flyers, as well as at the Iichiko booth, giving out samples. Iichiko was the official drink of the J-POP SUMMIT this year, and those cups of the American exclusive Iichiko Bar Fruits were really popular. Both the yuzu and ume shochu flavors were delicious, and it’s easy to see how they won a double gold medal at the 2014 San Francisco World Spirits Competition. The two flavors are currently only available in select Bay Area restaurants, but I cannot wait until I can buy a bottle to take home! 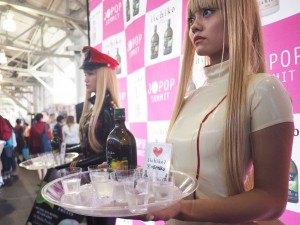 The Ryokan Pavilion was another highlight of the event. In the midst of all of the booths and vendors, there was a big structure installed in the middle of the festival that was modeled after traditional Japanese inns. It was lined with tatami and had a big area where you could sit down and relax, as well as separate rooms that gave informative video introductions to some of Japan’s most interesting ryokans. Japanese cultural icons, YANAKIKU were also hanging around at the Ryokan Pavilion at many points during the weekend.

There was also the Interactive Pavilion, which was  another new addition to J-POP SUMMIT. There were a lot of cool tech companies there showcasing the best and newest in Japanese technology! One of my favorite things in the Interactive Pavilion was the massive Attack on Titan colossal titan balloon head they were displaying. Kodansha was collaborating with Ricoh and FOVE, for unique visual experiences. Ricoh was displaying their awesome THETA camera that lets you take a 360 degree picture. (Check out the THETA photos with the titan head here.) 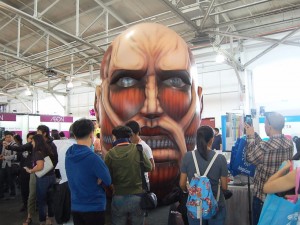 And last but not least, the performances were fantastic! The stage was all the way at the back of the venue, and the viewing areas were separated by badges. Press was at the front, VIP behind press, and regular badge-holders behind VIP. Towards the end of the day, around 6 pm or so, most of the booths started to shut down, and the entire festival focused on the main stage. All of the artists gave great performances, and each of the artists had a meet and greet or signing session, so everyone had a good chance of meeting them.

Overall, J-POP SUMMIT weekend was a blast, and I highly recommend the event to anyone who is thinking about going next year!