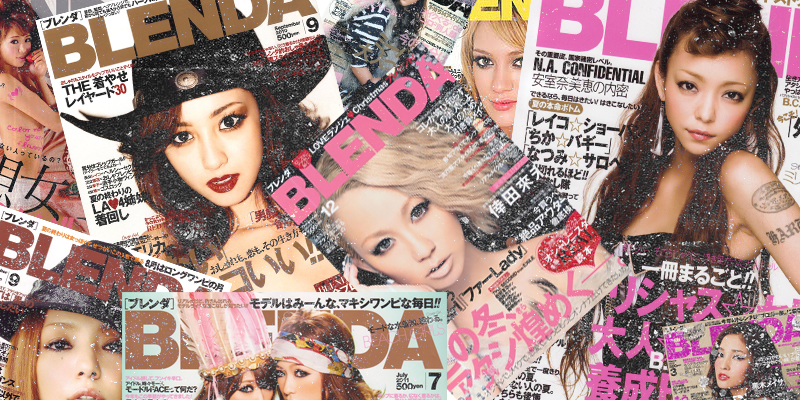 Magazine distributor Kadokawa Haruki Corporation has announced that the upcoming September issue of BLENDA out August 7th will be the magazine’s last.

Excite reports that former BLENDA model Wei Son recently confessed that she experienced an extreme depression at the end of her final photo shoot. Wei Son entered the scene as a Gyaru model and was eventually chosen as an exclusive model for PopSister. When PopSister fell under in September 2011, she began appearing regularly on BLENDA as the youngest one of its faces in April 2012. Now she feels that she has been abandoned by yet another magazine along with a bunch of other BLENDA exclusive models.

Tons of fashion magazines popular for their Gyaru styles have been dropping like flies such as Ageha and its many sister magazines (though AneAgeha is coming back with a different publisher later this year), Happie Nuts, egg, EDGE STYLE, and a bunch more. Of course there are a number issues that contribute to it, but how could so many beloved magazines completely stop in such a short amount of time?

The answer could simply be not being able to keep up with the times.

Japan is stuck in their ways

This isn’t the case for BLENDA’s parent company Kadokawa Haruki, but rather for the Ageha collection of magazines’ publisher Inforest who announced it earlier this year. Many people that worked for those magazines probably took the shutting down announcement as a surprise, and they probably barely knew about it much longer before it was announced to the public. Most people outside of Japan see the country as innovative and futuristic, which in many ways it is, but it can also be considered stubborn, stuck in its dated ways. Just check out the mess that is their digital music charts or how Johnny & Associates handles the use of their talent’s image. How backwards are those?

Naturally as time goes on, new styles pop up and old styles die out. It’s just how trends work in not only fashion, but anything you can think of. With Gyaru being prevalent for nearly 2 decades, surely many of those interested could have seen this coming. It has gone through many iterations, shifting from the relatively natural schoolgirls of 1995, to the shocking ganguro of the early 2000s and more recently to a glamorous blonde look. All these magazines failing is showing that it’s finally on its way yet the magazines continue to cling to it.

The emergence of Gyaru was important because it was a counter-culture, not fitting in with traditional Japanese culture nor how the media portray ideals of Japanese women. Over time, more subdued elements of it were absorbed into other styles and became commonplace. It’s at the point where it’s so far removed from the original ideals that many don’t even consider themselves Gyaru.

The problem is that so many magazines were stuck with their ‘exclusive’ models who were stuck in their ‘signature’ styles that they could not stray too far from. How many times can the same people show you how they do their eye makeup? The content just starts to get stale and outdated.

Blogging has been steadily rising since the early 2000s. In just the top 10 most popular websites in Japan you’ll find two hugely popular blogging platforms.

Many are quick to say print is dead, but the demise of these magazines has to do more with the fact they were not even talking about the internet in their issues. Barely, if ever, do they ever mention blogs in their magazines because that would take away from their print readership since the internet is so accessible. The original argument against blogs was that they weren’t able to be viewed on popular Japanese flip phones, but as more and more people switch to smart phones, the more people there are that can view these blogs on the go. The were discounted for way too long until they took over. Many young models recently have been able to rise the ranks purely based on their blogs alone. The bloggers post often and with ease, usually multiple times a day with what they’re wearing or makeup tutorials. They’re not rich and don’t wear expensive clothes that viewers aren’t able to imitate, a common complaint many had about the famous Gyaru models as they got bigger. Some magazines are trying it out, like ViVi, but it has been met with mixed response.

In its heyday BLENDA boasted a circulation of over 250,000 readers, defying the economic slump that claimed many other major magazine names in Japan’s recent history, but it fell victim to a loss of interest, declining advertising revenue and the troubles of its parent company. But who knows? Maybe a new batch of new magazines will pop up within the next few years that understand the importance of changing as society changes.

This was a guest post written by Marie Solberg.