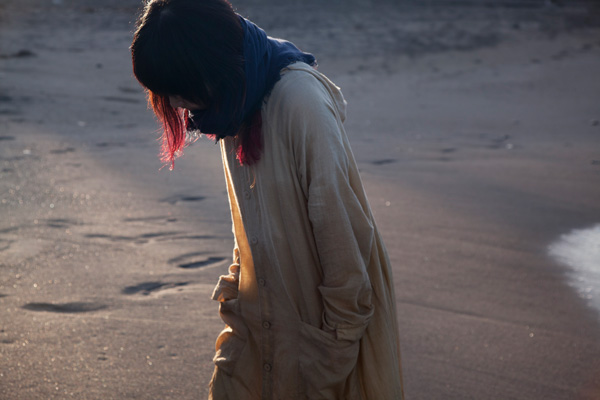 Hello there! I’m very glad to introduce a new, bi-monthly column here at ARAMA! JAPAN, where we plan to spotlight both J-Pop classics as well as newcomers that deserve some international love. I’ll be kicking off the column with a post about upcoming artist and my (user)namesake, Ichiko Aoba!

Who is Ichiko Aoba?

Ichiko Aoba is a singer-songwriter born in Chiba prefecture in 1990. She started playing classical guitar when she was 17 and released her first album ‘Kamisori Otome (Razor Maiden)’ in 2010 at just 19 years old. Since then, Aoba’s released 4 more albums: ‘Origami (Cage Hair)’,  ‘Utabiko‘,  ‘Radio’ (as Ichiko Aoba and The Fairies), and her latest album ‘0’ in addition to a handful of live albums.

What’s so special about her?

It’s absolutely incredible what technology allows us to do nowadays, from the kinds of sounds we’re able to make, to exactly how you to put together those sounds. It’s so easy to forget the atmosphere a single person can create with just their voice and an instrument… which Aoba does perfectly.

The beautiful thing about her music is that despite its simplicity, it manages to say so much. Aoba’s voice has a very pure and organic air about it. And there’s something about her songs that makes me feel like I’ve been sucked into a dreamy mori girl-themed void, then plopped back down a couple of minutes into the future when the song ends. Basically, she’s got a lot of talent for a young woman and has managed to carve out a very distinct sound for herself.

Ichiko Aoba’s albums have a great flow and deserve to be heard without skipping over any tracks in my opinion. If you’re not in the mood or would rather just dip your toes in, though, here are some tracks I personally recommend:

My absolute favorite song by her! The lyrics describe a pair of travelers who seem to be the lone survivors of a zombie apocalypse or… something. (They mention throwing corpses into a ravine?!)

So where can I find Aoba?

Her latest album ‘0’ under SPEEDSTAR and a few of her collaborations are available on iTunes, while the rest of her discography can be purchased online in physical format through websites like CDJapan.

Now that she’ll be wrapping up her Awabuku Tour this fall, hopefully more will be on its way! In the meantime, you can find her posting ridiculously artsy pictures on social media and her other official websites below:

Thanks for reading and please let us know what you think of our new column in the comments below!