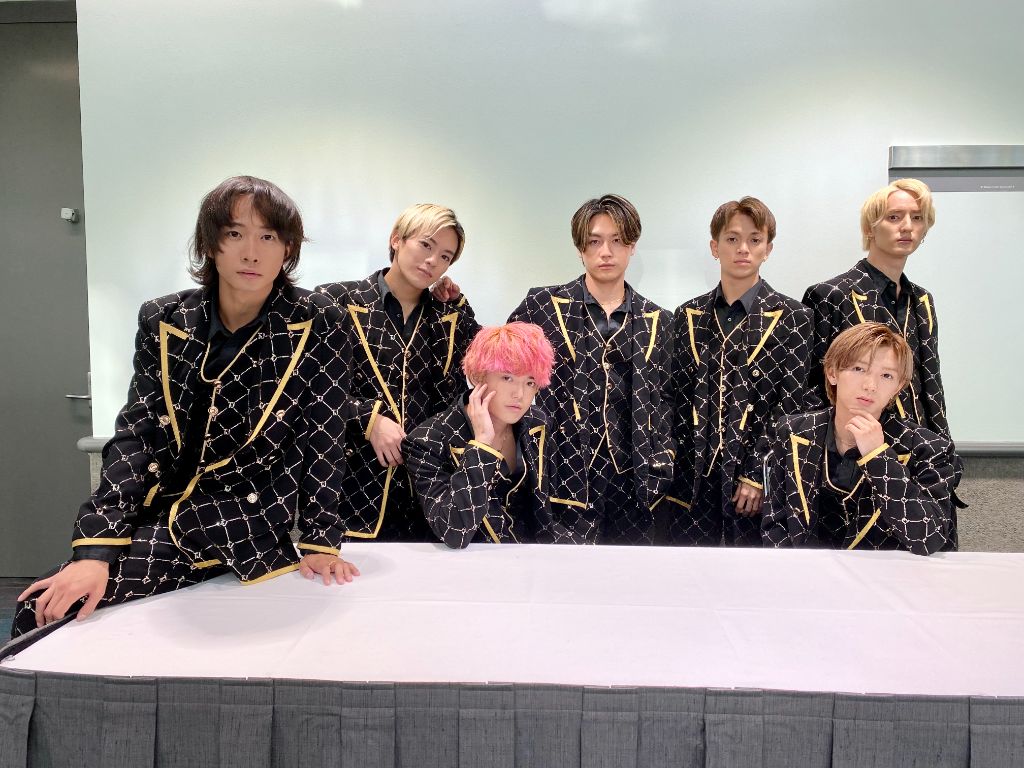 Earlier this year, it was announced that Travis Japan would be venturing to Los Angeles to continue their training. The group has also had a number of new opportunities while in the United States, including appearing on “America’s Got Talent.” Their debut on the show aired a few hours ago.

I recently sat down with the group on a video call to discuss their appearance on the show, as well as the differences between Japanese and American audiences, what it’s like to follow in the footsteps of their dai senpai groups by coming to America, and more. Check it out below!

What was your reaction when you heard you were coming to America?

Kaito Matsukura: Great excitement! We were really looking forward to it, but with a little bit of nerves. It was the first time we had ever been able to do something like this. First experiences are always a little scary. But we’re glad we are here and able to take voice and dance lessons from top level teachers. We are developing our skills, as well as developing into global artists.

What surprised you the most once you came here?

Shizuya Yoshizawa: Americans are very big on greeting people that they don’t know.

Kaito Matsukura: The performances in Japan are more in line with Japan’s viewing culture, where we perform and the audience watches. Americans are much more interactive. Like when Noeru (Kawashima) does backflips on stage, there’s a bigger reaction, like “OMG! WOW!” People in the audience are dancing along too. It’s a very different energy that is very surprising to us.

Dancing is a very big part of your identity. You even have a YouTube channel, “+81 DANCE STUDIO”, devoted to you dancing to classic Johnny’s songs. How did this come about? What’s your favorite video?

Kaito Miyachika: Johnny’s has a long history with many, many good songs. These songs are under the unofficial banner of “Johnny’s Classics.” These are songs that the various groups perform over the ages. The idea of the YouTube channel came about as a means of reinterpreting these songs for a new generation through dance. We would also be able to show not only our own dance talent, but also the talent of various choreographers from throughout Japan who may be inspired by these songs as well.

My favorite video is SMAP’s “SHAKE.” It’s an amazing song that means a lot to me, but also the dance in that video was choreographed by Kaito Takahashi of King & Prince. Working with a senpai we respect, but especially one who is such a great dancer, was a special treat for us. It was also the first video we shot in 2022. This year has been such a monumental year for us, as we get closer to our dreams, so that was a great way to kick it off!

Shizuya Yoshizawa: V6’s “HONEY BEAT.” Especially the one we recently shot in the desert outside of Las Vegas. It’s also the first video we shot here!

Ryuya Shimekake: And I did the choreography!

There was a recent Natalie article in which choreography in JPop was discussed by s**t kingz‘s shoji and GANMI‘s Sota. You were brought up. It was said that part of the reason your dancing is so good is because you’ve been training since childhood and because you have been on stage for years even though you have not yet officially debuted. What are your thoughts on this?

Kaito Nakamura: We actually saw that article, and it was touching to be praised by such big names in the world of dance, people that we as dancers look up to. As much as we respect what they say, we are constantly pushing ourselves to improve. What they said really lit a fire under us as we work here with top level choreographers to improve our skills. We want to use this American experience to take us to the next level.

Noeru Kawashima: I agree! It feels great to be praised by such big names. Dancers like them have their own style, and we as Travis Japan would like to have our own style as well. That is what we really want to focus on. We will see in the future what exactly that style will be. It’s a blessing to be able to have dance, which is a hobby for us, also be our career.

You are following in the footsteps of your dai senpai groups Johnny’s and Shonentai by having a training period in the US. What does carrying on this specific legacy mean to you?

Noeru Kawashima: The history of Johnny & Associates is so important to us, and we want to build on that. Our American experience is different to Johnny’s and Shonentai’s because we personally proposed this idea to build our identity and skills. On the one hand, we do recognize that what we are doing has been done before, but on the other, we come at it on our own accord. We are grateful for everything that Johnny Kitagawa and the company have done for us and we hope to continue to build on that legacy. We also want to stand upon that legacy and raise our flag to become a globally recognized group.

Continuing from that, in 1984, Shonentai appeared on the American television show “The Merv Griffin Show.” You are now set to appear on “America’s Got Talent.” What has this experience being on American TV been like for you?

Noeru Kawashima: It’s a great honor. We’ve been on TV a lot in Japan, but to be on an American TV, on a show that is shown around the world, despite barely being able to speak English, to be able to perform and showcase ourselves, it feels very sink or swim. It’s completely different from any other time that we’ve been on TV! The reactions we got, we’re very happy about it!

What do you hope to do in the future?

Kaito Miyachika: In the short term, we want people to be able to see our individual personalities. We want to be loved and admired by many people. Developing our English ability is part of that. That way we would be able to better communicate with many different people. But in the nearer future, we have the “World of Dance Championship” in Orange County in August. We hope to take home another trophy for our mantle!