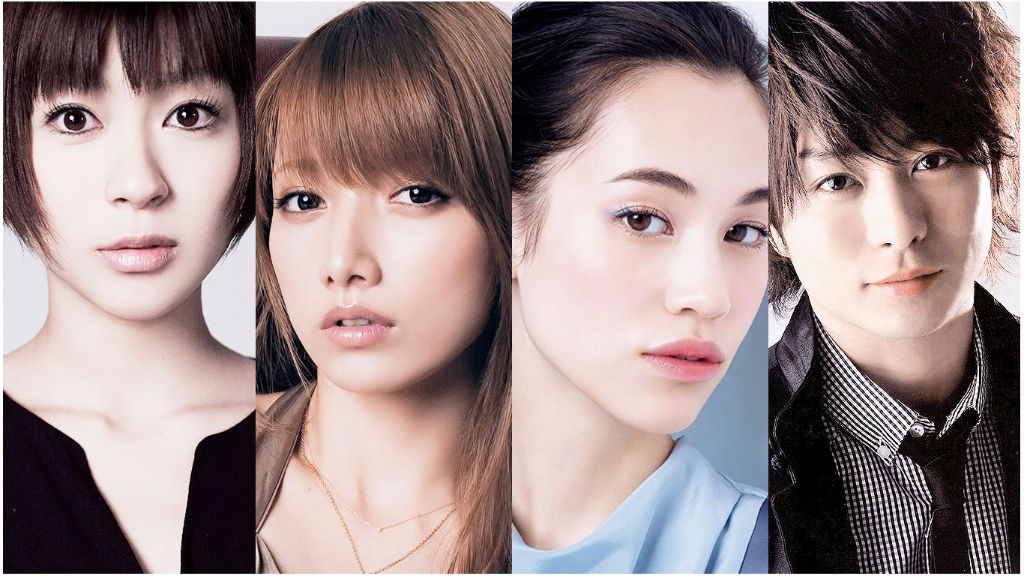 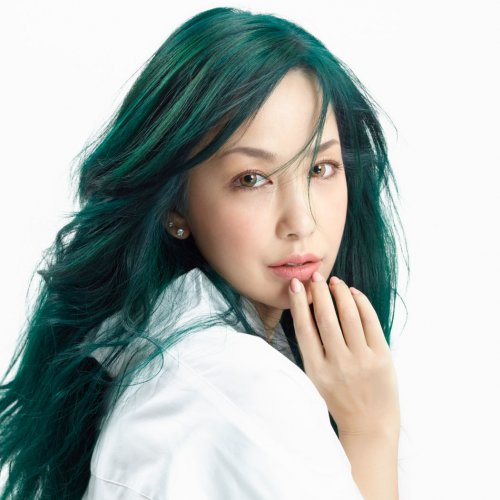 In May 2017, singer Mika Nakashima was the headline performer at the “TOKYO RAINBOW PRIDE 2017” event.

She described performing at the event as “a dream come true“. Mika further explained that hopefully events like this continue to play a huge part in helping to erase the prejudice and discrimination LGBTQ people face daily.

Furthermore, last year Mika attended a gay wedding of which she posted a photo of the happy newlyweds, expressing how proud she was to witness such an event. 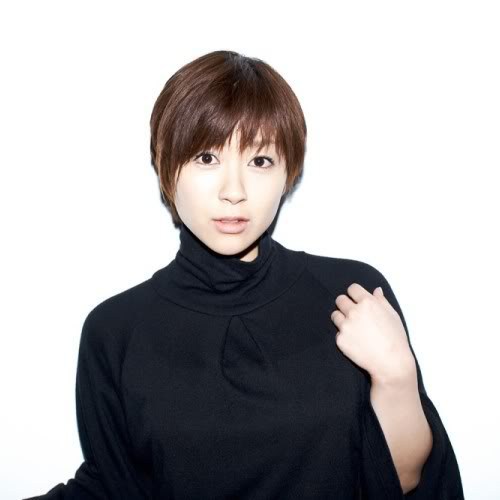 In 2010, singer Utada Hikaru posted a picture on her blog of six baseballs with drawings on them, including a bear holding a sign that says “Legalize gay M[arriage]” and outed her teddy bear, Kuma, as gay.

Actually, I don’t think I’ve ever really explained it here, but Kuma really is gay (he’s a boy but likes men only, no interest in girls…) so these illustrations flowed pretty naturally.

Oh, did I just out Kuma?

In 2016, Twitter user @KimuraShizuka baited Utada into speaking out about the LGBTQ community following the release of her song “Tomodachi” (which is written from the perspective of a gay friend), preaching sexual fluidity and alluding to belonging to the community herself.

What makes you think I'm "straight"? ?

My sexual orientation aside. To say gay ppl can only be understood or portrayed by other gay ppl is sad and alienating, no? 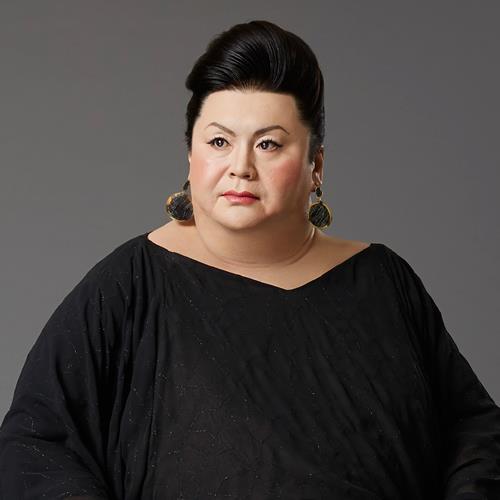 TV Personality Matsuko Deluxe, himself, is a gay man known for his cross-dressing stage persona, as well as his pro-gay remarks and sexuality. But his visibility as a top entertainer is no doubt important to spreading the message of the LGBT community.

People whose thoughts you can’t understand are scary; those who go against one’s wish are even scarier. People recognize others as enemies if they feel fear towards them. To think about sexuality means thinking about human beings. The more you think about it, the more you feel you are different from others. This is not because you are gay or because you are lesbian. This is because YOU are totally different from everyone. There is no need to fight with those who feel fear. Instead, what we must fight against is the foolishness of those who cannot accept people “different” from them. …That’s what I keep telling myself again and again. 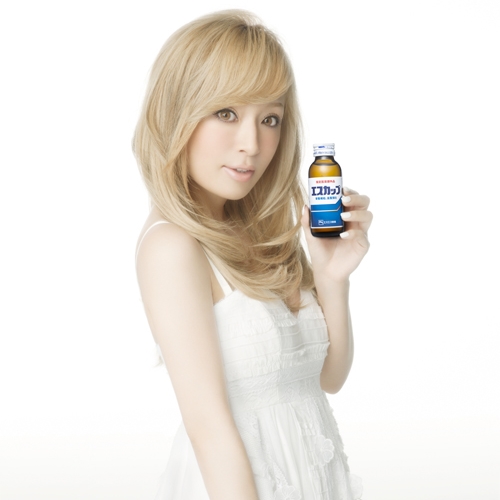 Singer Ayumi Hamasaki and her support for the gay community doesn’t exactly need any explanation if you have followed her career. Her most frequent collaborators have been gay, including photographer Leslie Kee, former stylist Alvin Goh, and producer/drag queen Timothy Wellard.

The music video for the song “how beautiful you are” from her 13th album Party Queen was lauded as the first Japanese music video to feature gay kisses (of actual couples). The Tokyo Pride Parade used it as their theme song in 2012, citing it as a “video that celebrated a variety of love.” Hamasaki responded:

I’m so happy that my song has been chosen because ever since I was young, I have been able to see the various sides of life in Nichome [the gay district in Shinjuku]. Have a lovely closing ceremony for the parade.

Ayu’s former backup dancer Lico, who has choreographed for AKB48 and SMAP and danced for Namie Amuro in the past, transitioned from male to female after departing from the singer’s troupe in 2007. She starred alongside Hamasaki in the music video “XOXO” in 2014.

Akie Abe, wife of the current Prime Minister of Japan 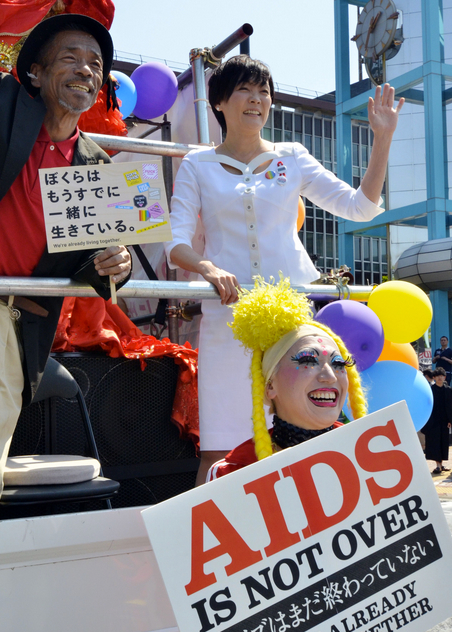 In 2014, Japan’s first lady Akie Abe – wife of Prime Minister Shinzo Abe – chose to show her support for the LGBT community by taking part in the third annual Tokyo Rainbow Pride event. The then 51-year-old wife of the highly conservative premier stood in all white on a float with a drag queen as the parade with over 3,000 participants plowed through the streets of Tokyo’s Shibuya district.

The first lady is popular for her somewhat liberal inclinations, a fresh approach to balance her husband’s hawkish politics.

“I want to help build a society where anyone can conduct happy, enriched lives without facing discrimination,” Abe wrote on her Facebook later, also mentioning that she had been involved in LBGT awareness efforts since she joined a commission set up by UNAIDS and the Lancet medical journal the previous year. 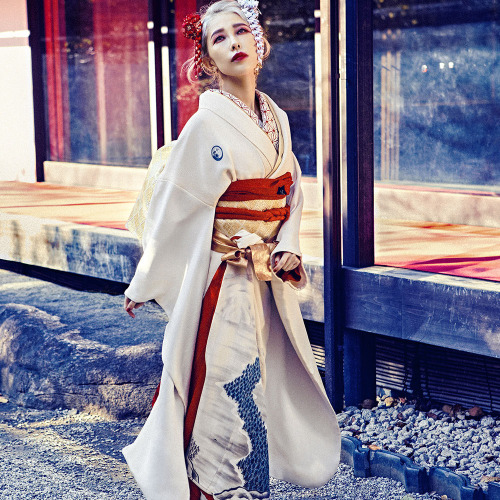 R&B singer Miliyah Kato has lent her star-power to campaign for various HIV/AIDS foundations throughout her career.

Miliyah’s 2014 album “LOVELAND”  included a song called”PRIDE“. The sweet love song is an ode to LGBTQ relationships, which are clearly expressed in the lyrics. An excerpt of “PRIDE” can be seen below.

They often say “You’re unusual”
They mock us saying “You’re crazy”
A sweet scent, you’re beautiful
“They can say anything really”
Innocently with a serious face
Huddling bodies together in the crowd of people
You murmur mischievously
I like that about you, that’s why I get worried

Everyone doesn’t need to understand
May I chose a way of life like that ?
(I don’t know why. Why ? Oh world)
(Won’t you leave us be a bit ?)
Licking each other’s wounds softly
Shut up in a happy room
(Cause we don’t need criticism)
(Because I believe and gaze only at you)
As long as we can live on together ah ah ah ah