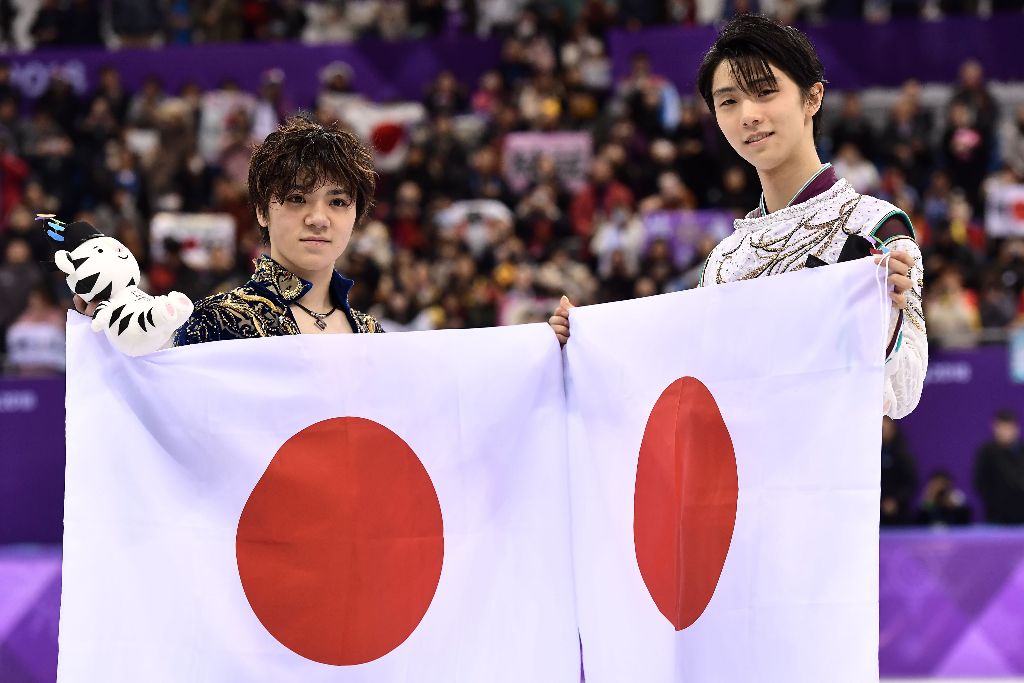 From February 9 – 23, the figure skating portion of the 2018 Winter Olympics will take place. Japan’s team is composed of Yuzuru Hanyu, Shoma Uno, Keiji Tanaka, Satoko Miyahara, Kaori Sakamoto, Miu Suzaki & Ryuichi Kihara, and Kana Muramoto & Chris Reed. On February 17, Yuzuru Hanyu won the men’s portion of the event, with Shoma Uno taking second. This is the first time Japan has ever won multiple medals in a single figure skating portion at the Olympics.

Yuzuru Hanyu won the men’s portion of the Winter Olympics with a total score of 317.85, a new Olympic record. His back to back Olympic wins make him the first man to achieve this feat since American Dick Button won the 1948 and 1952 Olympic titles. Two other men have achieved this as well, Sweden’s Gillis Grafstrom (1920, 1924, 1928) and Austria’s Karl Schafer (1932 and 1936). After taking three months off due to injury, Yuzuru came back to give Japan their first gold medal of these Olympics.

Yuzuru’s short program received a score of 111.68, putting him in first place, and also setting a new Olympic record. He opened with a quad salchow, followed by a triple axel, and finished with a quad toe loop / triple toe loop combination.

“I just felt happy to skate,” he said afterwards. “I just felt satisfied with my every element. I am really happy because I was really feeling the music, too, and the ice.” When asked about his comeback post-injury,  Yuzuru said, “Just doing my best. I wanted to say to everyone that I am back here. And I am really happy today. I just want to say thank you for cheering and I am back.” Asked about the possibility of winning a consecutive gold medal at the Olympics, he said, “It doesn’t matter. I don’t think about it. I am just focusing on myself. I’m very happy that there are a lot of (Japanese) in the audience, but I couldn’t perform for the last three months, so I am very happy to be back.”

Yuzuru’s free skate was the second best of the event, with a score of 206.17, 8.91 points behind American Nathan Chen. Yuzuru opened his program with a quad salchow, followed by a quad toe loop, and then a triple flip. After a combination spin and step sequence, Yuzuru executed a quad salchow / triple toe loop combination. The lone error came when he did only the first jump, a quad toe loop, in a planned three jump combination. He later did a triple axel / single loop / triple salchow combo, a triple loop, and a triple lutz. Yuzuru closed with a sit spin, choreographic sequence, and a combination spin.

After the score of Shoma Uno, the final skater, was posted, Yuzuru began to cry, knowing that he had won. “I have no words, right now. I am overwhelmed. This is the best day of my skating life. My tears were from my heart. I can find one word and that is ‘happy.’ ” After some time to take it all in, Yuzuru attended the post-event news conference. “Since I was injured, I am very fortunate to skate here at the Olympics,” he said. “I am indeed very happy to win the Olympic gold medal.” He added, “I am truly proud of this achievement. I had to do what I could do at this moment.”

Prime Minister Shinzo Abe also congratulated Yuzuru via Twitter, writing, “Huge congratulations to Mr. Yuzuru Hanyu on capturing a second consecutive Olympic gold, despite overcoming an injury,” He added, “Your stunning performance on the ice was truly moving. Thank you for touching our hearts!”

Shoma Uno finished in second place with a total score of 306.90. His short program ranked third, with a score of 104.17, 3.41 points behind Spain’s Javier Fernandez. Shoma opened a quad flip, followed by a quad toe loop / triple toe loop combination, and then a triple axel. He also received level-fours on all of his spins and a level-three for his step sequence.

“I’m happy I could skate clean,” Shoma said after his skate. “That why did the ‘guts pose’ when I finished.” He continued, “For this competition, I have been practicing as usual, so I did not do anything too different to prepare. I didn’t do anything special just because it was the Olympics. My practices here have been shaky, but that’s pretty much the usual for me.”

Shoma’s free skate was also ranked third, with a score of 202.73. He fell on his opening quad loop, but landed a quad flip and two quad toe loops. In typical Shoma fashion, his reaction to getting the silver medal was understated. “There was no special feeling right now. I was just focused on my performance. The goal was to pull off what I had prepared.” Talking about his fall on the quad loop, he said, “I missed the first jump, but the rest of the program was fine. I stayed calm after the mistake and was able to give a good performance. I tried to skate like in practice.”

Dick also had praise for Shoma, a skater he has admired for a while. “Quad flip, great deep edging, soft knees,” he tweeted about Shoma’s short program. “Great theatre — Marvelous tight spinning in the air. Doesn’t have the elegance of Hanyu, but a very strong secure program.” Of Shoma’s free skate, Dick wrote, “A powerful sparkplug.”

The pairs event took place February 14 – 15. The pair of Miu Suzaki & Ryuichi Kihara had a short program score of 57.74, putting them in 21st place. There were unable to move on to the free skate.