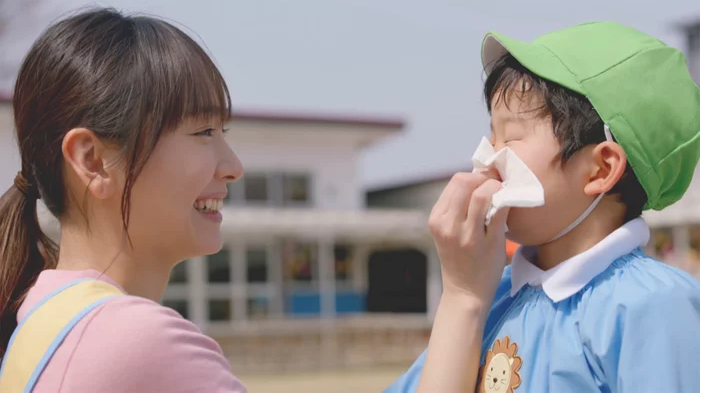 Actress Yui Aragaki is the star of a brand new CM for Kleenex, it will begin to air in Japan nationwide today on May 8th, 2018.

In the CM Aragaki becomes “Yu sensei”, a kindergarten teacher. A small boy, one of her students, has a runny nose and she quickly comes to his aid by handing him a kleenex. Unable to blow his nose by himself, she gently helps him out.

Shooting for the CM took place in an actual kindergarten in Tokyo. Aragaki had tons of fun on set, she was constantly running around and playing with all the children.

In a statement Aragaki shared that she was really proud of the kids, shooting took quite long but none of them made a fuss or became overwhelmed. She further stated that the entire experience was quite “healing” for her.

They quickly grew attached to the actress, in some behind the scenes footage one of the children “tackle hugs” Aragaki, and refuses to let go! Watch the full CM below.