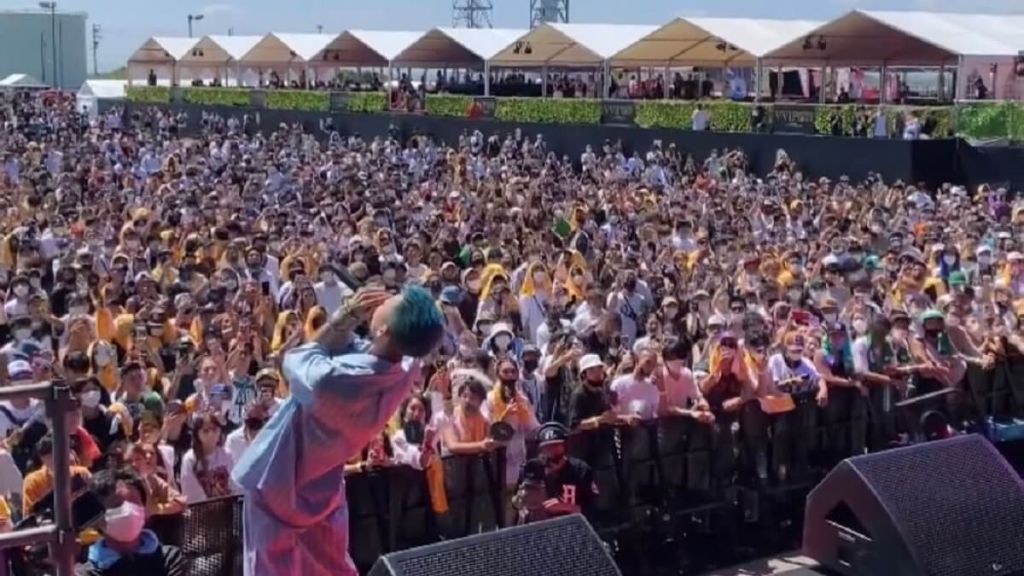 Japan is currently in the grips of its fifth wave of COVID-19, the biggest one to date. The country has been struggling to control a rapid spike in coronavirus infections, with 21 of the country’s 47 prefectures currently under a COVID-19 state of emergency. Something that has puzzled many people though is why several large events are still taking place.

One such event that went viral on social media this weekend was the hip hop festival “NAMIMONOGATARI 2021.” The festival featured the likes of BAD HOP, Awich, JP THE WAVY, AKLO, and FAKY. It was held in Tokoname, Aichi Prefecture, which is one of the prefectures currently under a state of emergency.

Video of “NAMIMONOGATARI 2021” appeared on social media, featuring a tightly packed crowed of about 8,000 not observing social distancing measures, not wearing masks, and drinking alcohol.

“No social distancing was observed near the stage, and some alcoholic beverages were sold at the venue. It is extremely regrettable that our safety requests were not followed,” Aichi Governor Omura Hideaki said in a press conference today.

On August 8, the Aichi prefectural government began implementing business restrictions, including a request for large event organizers to refrain from selling alcohol. Tightened restrictions under the state of emergency declared for the entire prefecture on Friday set an audience cap for large events at 5,000.

The event’s organizer, Nagoya-based office keef Co., says the annual music event has been held since 2005. Under event guidelines posted on its website, attendees were asked to wear masks, stay at least one meter from each other, and refrain from shouting. The company originally planned to sell 10,000 tickets for this year’s festival.

Omura said the prefectural government will protest against office keef Co.’s failure to implement anti-infection measures and that it will no longer allow the company to use any of the prefecture’s public facilities.

Aichi governmental officials later said a letter of protest was sent to the origanizer, requesting it to report on how COVID-19 measures were taken at the venue.

office keef Co. issued a statement saying audience members did not observe social distancing, despite repeatedly being reminded about anti-infection guidelines via the main display screen and speakers. At one point, a host of the event cautioned people against removing their masks.

The company also said the preparations to implement COVID-19 measures at such a large event should have been better and it “deeply apologizes for causing trouble.”

As for alcohol sales, office keef Co. said it reported to the prefecture in advance that some beverages it had already bought from suppliers would be sold during the event, with sales limited to two servings per person.

Tokoname Mayor Ito Tatsuya said during today’s session of the city assembly that he will also send a letter of protest to the festival’s organizer. “It was an extremely pernicious event in which none of the safety guidelines was followed,” Ito said.

Zeebra, who performed at the event, said in a Twitter post, “I performed at yesterday’s Namimonogatari because I was told that rules set by the prefectural government will be followed (at the venue), but it was a dangerous environment.”