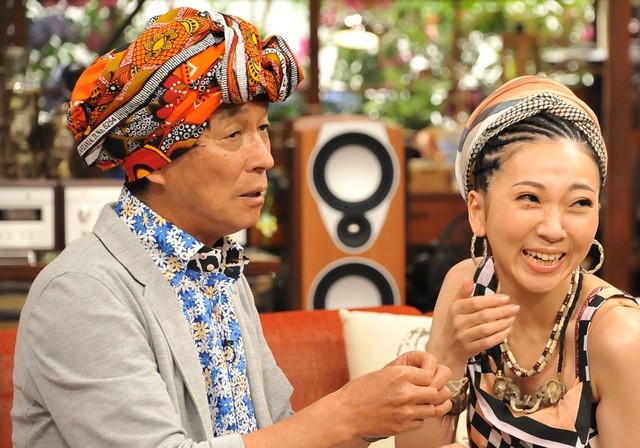 To commemorate the event, MISIA brough a basket of gifts and presented one of her trademark head wraps to host Sanma Akashiya and began the interview by wrapping it around his head.

“Do I look like a pickpocket?” asked Sanma. (Editor note: As pointed out by Nah in the comments, this is in reference  to how burglars in the Edo period would tie scarves known as called a “hokkamuri” to their face.)

On the show, the two talked about MISIA’s career and even looked back at Sanma’s first variety show appearance to make MISIA comfortable.

In May 1997, MISIA passed through a BMG Japan audition to find a soulful female R&B singer from about 3,000 candidates. “Conscious” of the image of an R&B singer, she styled her hair in dreadlocks that November used the stage name “MISIA” at the beginning her music career. Since then, she has maintained the look and has incorporated head wraps into her wardrobe, similar to R&B legend Erykah Badu.