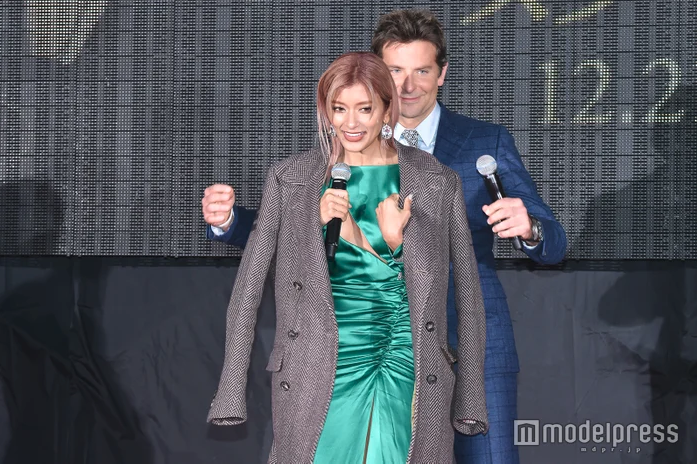 Yesterday the Japanese premiere for the acclaimed movie “A Star Is Born” was held in Tokyo. One of the main actors, and the director Bradley Cooper was in attendance. Missing was his leading woman, Lady Gaga.

Gaga was unable to attend due to her hectic promotional schedule, but luckily for the world luminary Rola was able to step in and attend the premiere!

Rola wore a bold emerald green dress, showing off her chest and famous long legs.  Rola revealed that she was drawn to the dresses beautiful color, and the bold shoulder pads give it a cool/unique edge.

She had nothing but compliments for the film, praising the character Jackson Maine (Bradley Cooper) “There were parts where I really sympathized with him“.  Rola was also full of praise for Gaga’s acting, and of course the music she created for the film.

During the talk Rola started to slightly tremble because of the weather, which is when Bradley stepped in putting his jacket on her shoulders. What a gentleman.

Check out photos from the premiere below

If Japan were to do a version of “A Star Is Born” should Rola be cast in the LEAD role?