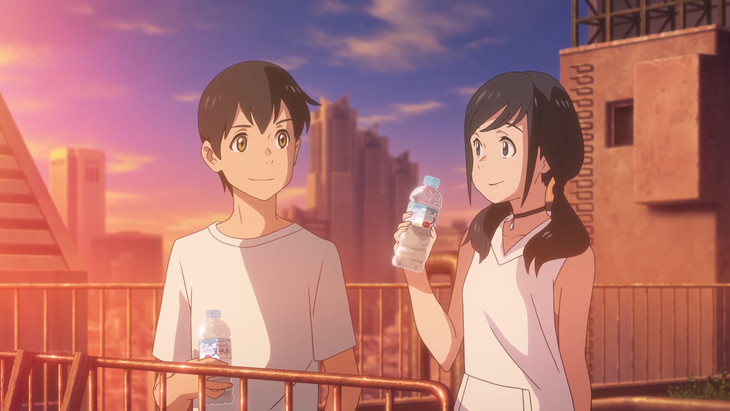 The film “Weather Child” Weathering With You” was released nationwide in Japan on July 19th, 2019. To promote the film a collaboration with Suntory was announced, promoting their “Natural Water”.

In the CM the characters sing a special version of the theme song “Ai no Dekiru Koto wa Mada Aru Kai”, provided by RADWIMPS. They were also responsible for the OST from director Makoto Shinkai‘s blockbuister 2016 hit “Your Name”.

Check out the CM below:

Weather Child: Weathering With You follows a high school student named Hodaka. He moves from a tiny island to Tokyo, and in-order to help support himself he finds work at a questionable occult magazine. While working at the magazine he meets a girl named Hina who can apparently control the weather.

Makoto’s Your Name made history by earning $358 million globally at the box office. Not only did this set records for an anime film, but it became the highest grossing Japanese film of all time. Domestically it’s still #2 however, behind Hayao Miyazaki’s Spirted Away.