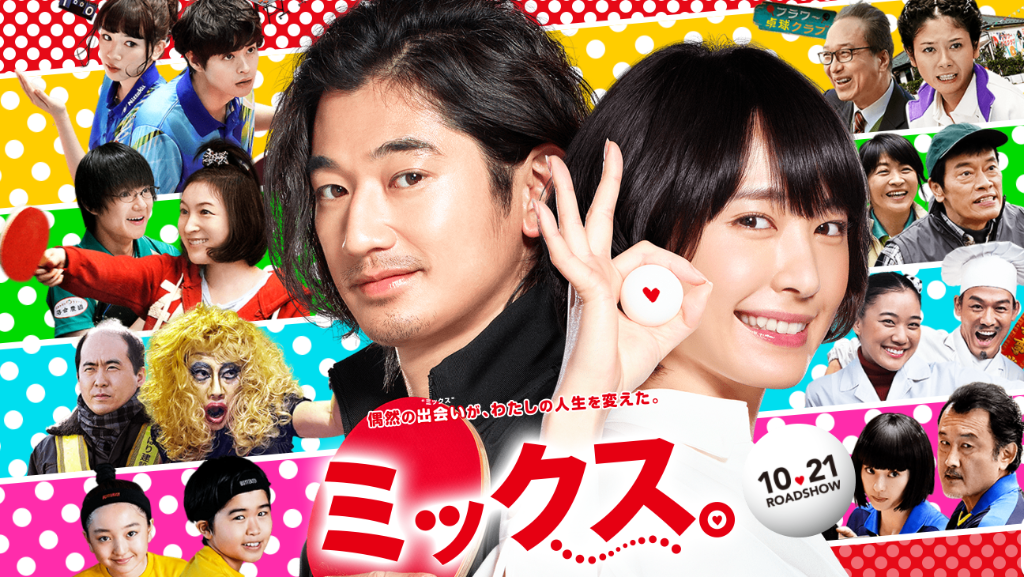 The official trailer for “Mix” starring Eita & Yui Aragaki has been released.

Yui plays the main character Tamako Tomita. As a child she enrolled to take part in strict table tennis lessons by her mother, she soon became known as a table tennis prodigy within the table tennis community. After the death of her mother Tamako decided to stop playing and live a normal life. Now 28 years old she works as a office lady. Her boyfriend Akihiko Ejima  (Koji Seto) also works at the same company, and just so happens to be a member of a company table tennis club.

However, Akihiko soon meets new employee Airi Ogasawara (Mei Nagano) and falls for her instantly. He swiftly dumps Tamako to be with Airi. Depressed and devastated Tamako decides to take a trip to her home town.

There, she discovers that her mothers table tennis club isn’t quite what it used to be. It’s slightly run-down and seems to be on the verge of closing down. She soon meets Hisashi Hagiwara (Eita) at the club, one of the very few new members. Hisashi is in a similar unfortunate situation, he was recently dumped by his wife and she ran off with their young daughter. Tamako soon learns about an upcoming table tournament in which Akihiko and Airi will be participating in. Tamako decides to enter the doubles competition with Hiashi to get revenge on her ex and bring glory back to her mother’s table tennis club.

“Mix” will be released to Japanese theaters on October 21st, 2017. Watch the trailer below!