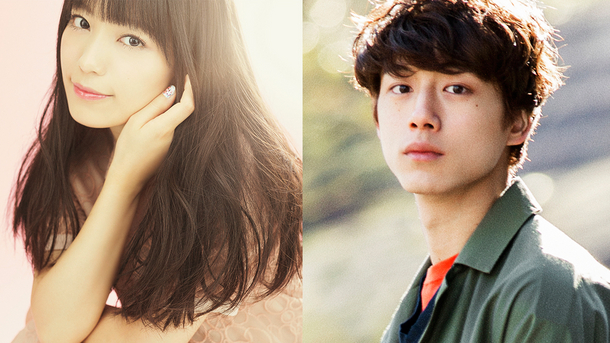 Can anyone imagine a cuter on-screen couple? Singer-songwriter miwa and heartthrob on the rise Kentaro Sakaguchi will headline the upcoming romance movie ‘Kimi to 100-kaime no Koi‘. Among the recent majority of novel/manga adaptations, the movie is exceptionally an original story written by Satomi Ooshima (‘My Darling is a Foreigner’, ‘1-litre of Tears’) and directed by Sho Tsukikawa (‘Kurosaki-kun no iinari ni nante narenai’).

The story starts when Aoi (miwa), a student and lead singer in university band, gets involved in an accident. One moment later, she is still well and in the lecture hall. It is then, that her childhood friend and band-member Riku (Sakaguchi) reveals his secret. He can rewind time and will use it to save Aoi and to confess his feeling. But – as one can expect from a time-travel movie – there is a catch…

miwa has already appeared in the movie ‘Maestro!‘ with Tori Matsuzaka in 2015 and in an NHK special drama ‘Kouhaku ga umareta Hi‘ about the origins of the NHK Kouhaku Uta Gassen song competition. She has portrayed the ‘Ringo no Uta’ singer Michiko Namiki and received a lot of praise for her well-balanced performance.

Kentaro Sakaguchi is one of hottest young actors at the moment, after his appearance in movies ‘Heroine Shikkaku‘ and ‘Ore Monogatari‘ and Getsu9 drama ‘Itsuka kono koi wo omoidashite kitto naite shimau‘. He can currently be seen in the drama ‘Juuhan Shuttai!‘ opposite Haru Kuroki and in asadora ‘Toto-neechan‘.

miwa will write a love song specially for this production that will play an important part in the story. Kentaro Sakaguchi, who is one of the band members in the movie and a complete newcomer to music, will play the guitar.