Teaser trailer, visuals and additional cast are announced for the upcoming film “Laplace’s Witch”. The film, adapted from Higashino Keigo’s novel, stars Sakurai Sho. The film will be released during the busy blockbuster week of Golden Week next year. Sakurai stars in a movie after 4 years and since Yatterman (2009), reunites with director Takashi Miike.

Teaser trailer and visuals are out below!

Two suspicious deaths occurred in a row. Despite the fact that each incident occurs far from each other, the cause of death is the same. Both died by hydrogen sulfide poisoning. In addition, the two who died were acquaintances. The police seeks help from Professor Shusuke Aoe (Sakurai Sho), a geochemist to investigate the incident.

Aoe carefully examines the terrain, geology, weather and such of the blocked incident scene, negating the incident occurs under natural circumstances. However, a woman, Madoka Uhara (Hirose) appeared at the scene of the incident and guesses correctly that a natural phenomenon will take place. Is it a miracle or a coincidence?

Fukushi Sota will play as Amakasu Kento. He is a mysterious young man who went missing and is connected with Madoka Uhara. Meanwhile, the police began to suspect the involvement of Madoka to the incidents and finally, a third incident has occurred. 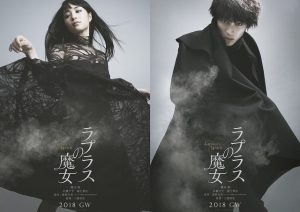