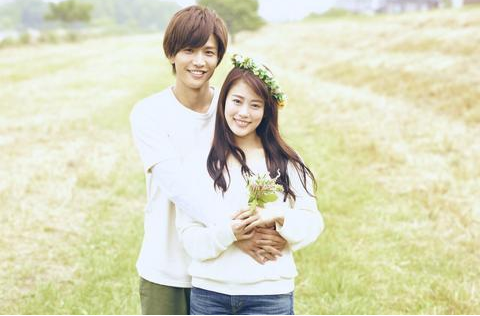 EXILE and Sandaime J Soul Brothers member Iwata Takanori will be starring with actress Takahata Mitsuki in the live action film adaptation of Arikawa Hiro’s “Shokubutsu Zukan”. It will be released in 2016.

The movie is based on the bestselling romance novel written by Arikawa, which has sold over 800,000 copies. Many of her works such as “LIBRARY WARS”, “Job-hopper Buys a House”, “Public Affairs Office in the Sky”, “Hankyu Densha” and “Sanbikino Ossan” have been already adapted for TV dramas and movies.

The story begins when one night an office lady Sayaka (Takahata Mitsuki) who’s frustrated with her work and personal life comes home to find a man named Itsuki (Iwata Takanori) lying in front of her apartment.

“Miss, could you please let me stay if possible?” An ultimate prince appears in front of an office lady who lives alone!

And for some reason, Sayaka lets Itsuki move into her home, which led to their very exciting life as housemates. Surprisingly, Itsuki is good at cooking and also teaches Sayaka about the world of “wild herbs” which she knows nothing about. As time goes by in their everyday lives, they are starting to get drawn to each other. However, this prince, who suddenly showed up in Sayaka’s ordinary life and has not told her anything except for his name, is hiding something from her…

One night, an office lady Sayaka Kawano (Mitsuki Takahata) who’s frustrated with her work and personal life finds a man named Itsuki lying in front of her apartment.
“Miss, could you please let me stay if possible? I’m not a bad guy. I’m well educated.”
Sayaka is tipsy, which makes her feel like she dreaming and so, as if she’s taking a puppy home, she lets the hungry Itsuki in and treats him with a good meal.
The following morning, Sayaka is woken up by the delicious smell of the cuisine. Itsuki who is actually good at cooking makes her breakfast with the leftovers in her fridge. Sayaka is deeply impressed with his cooking, so she says to him without any hesitation, “You can stay here if you have nowhere to go.”
And she makes a deal with him that Itsuki needs to do all the housework. And from this, they started to live together as housemates.

Itsuki knows herbs very well and teaches those which Sayaka considers “ordinary weeds”, patiently telling her the names of each of those herbs. And on holidays, he would take her for a walk along the riverbed and go “herb hunting”, collecting herbs to be used for creating delicious cuisines one after another.
From rice mixed with fuki (butterbur) to pasta made with nobiru (Japanese garlic), “It’s hard to think that they can be served this way.”
Sayaka used to feel that she was just drifting through life; but with Itsuki, she feels her life has become full of shocks and surprises.

Life with Itsuki is comfortable and pleasant. As the season starts to change, Sayaka gradually falls for Itsuki, but she still knows nothing about his life and experience.
Sayaka always thinks that once she asks him about it, this relationship between them could be ruined. So, she tries to keep the distance, as if “they are just two people living together”. Yet, because of an incident, she was finally able to disclose her feelings for Itsuki.

But all of sudden, Itsuki disappears from Sayaka’s home.
There is something in his heart that he tries to hide from Sayaka……

Will Itsuki be Sayaka’s Mr. Right? And, what kind of ending will these two have…!