The live-action adaptation of popular seinen manga Terraformars is going to hit Japanese theaters on May 29. However, fans who are eager to see director Takashi Miike’s interpretation of the cockroach apocalypse story won’t have to wait that long for a sneak peek; Docomo’s dTV streaming service announced on February that a drama prequel for the live-action movie is in the works, called Terraformars:Aratanaru Kibou (lit. Terraformars: A New Hope). Last week, a preview video was revealed.

As you will see on the video below, the prequel focuses on the screening process of the Mars expedition—so unfortunately, no caveman cockroaches yet. Taking place in the research institute responsible for the crew selection, the story revolves around the mental conflict and drama among the candidates as they fought each other to secure a seat on the rocket to Mars.

Aratanaru Kibou is directed by Yoshitaka Yamaguchi, who previously worked with the live-action movie’s director Takashi Miike on Yakuza Apocalypse as a screenwriter. Miike himself only acts as a supervisor for the prequel. 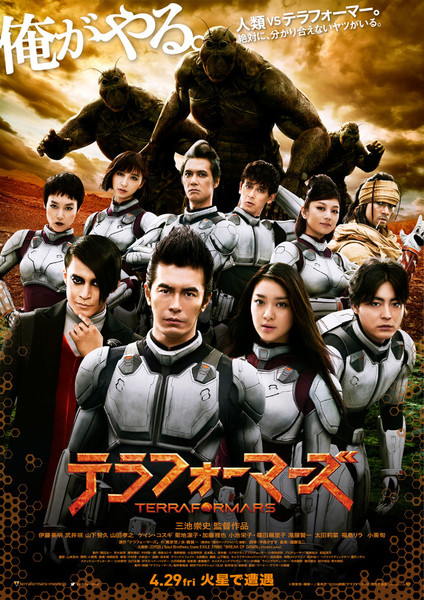 Terraformars (the live-action movie) is based on Sasuga Yu and Kenichi Tachibana‘s hit manga about an expedition to Mars that went horribly wrong thanks to a colony of mutated cockroaches infesting the planet.  Takashi Miike (Audition, Ichi The Killer) is directing, with Kazuki Nakashima (Gurren Lagann, Kill la Kill) on the screenplay. Sandaime J Soul Brothers is providing the theme song for the film.

Are you planning to catch Terraformars, Arama! readers? Well, before you see the live-action on May, check out the preview for the prequel below!