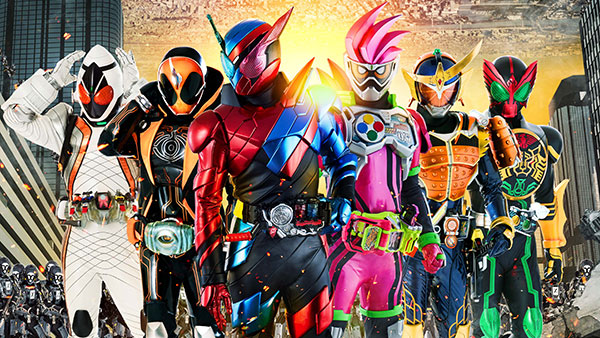 There are four new films that opened last weekend. This update is late so will try to put up the new box office chart sooner, which sees the face off yet again of mega blockbuster franchises Star Wars and Yokai Watch.

Opening at no. 1 is Kamen Rider Heisei Generations Final: Build & Ex-Aid with Legend Rider, the 57th film of the franchise. The film mobilized 303,089 viewers (¥359,247,200) during its opening weekend. The Kamen Rider franchise films is largely fanbase driven and frontloaded but it marks a good start for the new film as it opens 32% higher than the previous film released same period last year.

At no. 2 is Destiny: Kamakura Monogatari (Destiny: The Tale of Kamakura) starring Sakai Masato and Takahata Mitsuki. The film attracted 231,465 viewers and earned ¥297,203,000. Based on Saigan Ryohei’s manga, the film is directed Yamazaki Takashi, who also previously adapted Saigan’s manga series “San-chome no Yuhi” into movies. The film is a fantasy work set in Kamakura where humans, demons, monsters, and ghosts live together.

At no. 3 is mystery film Murder on the Orient Express directed by Kenneth Branagh based on the novel of Agatha Christie. The film stars a huge cast with Johnny Depp, Michelle Pfeiffer, Judi Dench, and Penelope Cruz. The film attracted 169,100 viewers (¥226,000,000) during the weekend.