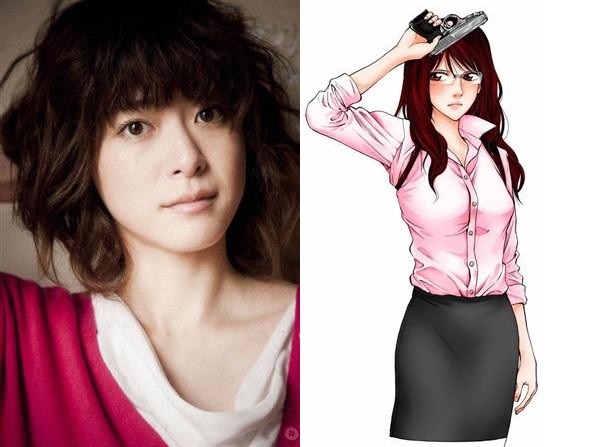 It was announced that Ueno Juri will be joining Oguri Shun and Ikuta Toma in the TBS drama series “Ouroboros”, starting January of next year.

“Ouroboros” will mark the first time in 8 years that Oguri and Ikuta will be working together. It is the first live adaptation of the popular manga of the same title by Kanzaki Yuya, and tells the story of two childhood friends, set to exact revenge for their foster parent. Ryuzaki Ikuo (Ikuta Toma) became a police detective with outstanding physical ability and Danno Tatsuya (Oguri Shun) became a leading member of a yakuza.

Ueno will play as Hibino Mizuki, Ikuta’s detective partner, an elite graduate of Tokyo University. She becomes suspicious of the nature of relationship between her partner Ryuzaki and Danno . It is the first time for Ikuta and Ueno to work together and there will be romantic relationship between their characters. However, Ikuta says “the love story will be a little sad”.

This is the first time for Ueno to play a detective ad she admitted she was a bit reluctant to play the role because of usual image of the character being serious and upholding justice. However her character has to deal with the conflicting emotions of liking Ryuzaki and at the same time suspecting him of doing something criminal, thus she was able to accept the role without resistance.