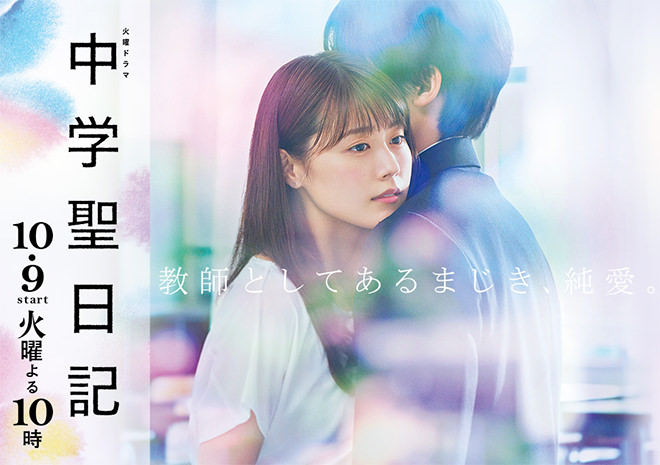 The drama premiered last October 9 with 6.0%, a disastrous rating. The previous drama in the TBS Tuesday timeslot, Ayase Haruka’s “Gibo to Musume” premiered with 11.5%, with a final episode of 19.2% and average rating of 14.2%. The  sensational theme may have caused viewers to leave. In social media, feedback is also negative, “Junior High School Diary is creepy. I only watched 20 minutes and stopped.”; “It can be accepted that at a young age the child is unstable, but he looks like a stalker.” ;”Creepy. Is it okay for TV dramas to allow this setting? “; “It is impossible to make this a pure love. I feel sick.”

Arimura’s asadora drama “HIYOKKO” is popular and gained an average rating of 20.4%. However, her primetime starring dramas have been lackluster. She’s hounded as a “low rating” actress for a while because of her low rated dramas such as the getsu9 drama with Kora Kengo (9.7%) and Eien no Bokura Sea Side Blue (8.0%). She recovered with the asadora drama but her current work might brand her negatively again.

Can the drama recover for the next episodes?