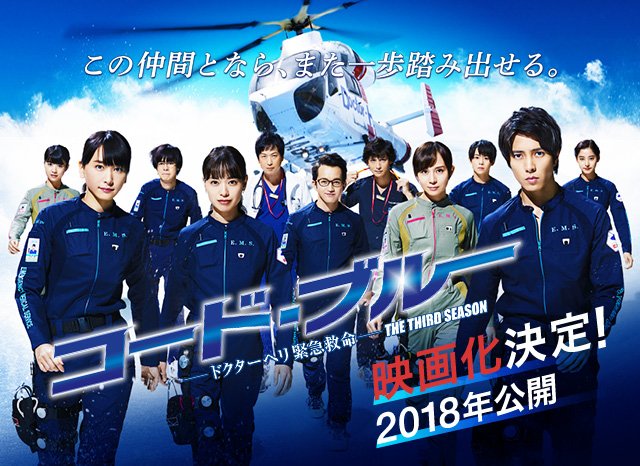 Code Blue Season 3 ended last night but fans of the drama can look forward to something more next year!

The last episode of Fuji TV getsu 9 drama “Code Blue – Doctor Heli Kinkyuu Kyuumei ~ THE THIRD SEASON” starring Yamashita Tomohisa was aired on the 18th. At the end of the episode, it was announced that the popular drama will be getting a film adaptation, opening in 2018. Towards the ending, the words “Movie Decision” and “Published in 2018” are displayed together with images of Doctor Heli and others.

The new season returned seven years after the 2nd season with the the original cast Yamashita Tomohisa, Aragaki Yui, Toda Erika, Asari Yosuke and Higa Manami. The drama premiered this July with 16.3%.

The last episode is extended by 30 minutes, aired from 9 PM to 10:24 PM. The doctors rushed to a scene of a collapse which happened inside the railroad track before the opening of the subway. However, another collapse happened inside the tunnel where Aizawa (Yamashita) and Fujikawa (Asari) where treating patients.