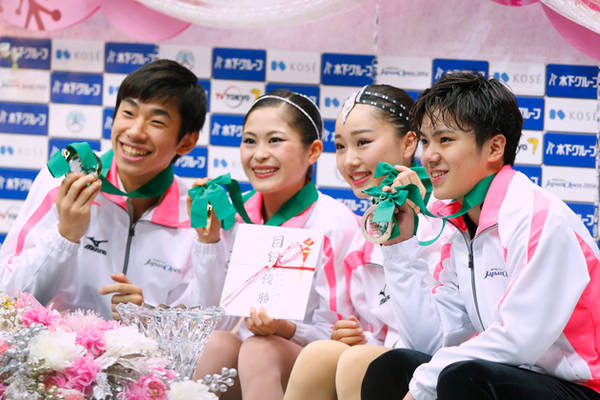 On October 1 at Saitama Super Arena, this year’s Japan Open took place. Team Japan, consisting of Shoma Uno, Nobunari Oda, Satoko Miyahara, and Wakaba Higuchi, won the event for the second consecutive year. With a score of 637.65, they bested Team Europe’s score of 595.66 and Team North America’s score of 574.20.

In the men’s competition, Shoma Uno came out on top with a score of 198.55, beating Javier Fernandez of Spain’s score of 192.20. If this was an official event, this would be Shoma’s personal best score. He opened his program with a quad flip. Shoma became the first person to ever land a quad flip in international competition earlier this year. He followed his quad flip with a fall on his quad toe loop.

Retired skater Nobunari Oda came in third place with a score of 178.72. During his program, he landed a quad toe loop.

On the women’s side, Satoko Miyahara came in second place with a score of 143.39, behind Evgenia Medvedeva of Russia, who scored 147.07. If this was an official event, this would be Satoko’s personal best score. She was pleased with the score her new program received ahead of the beginning of the Grand Prix series. “I was able to skate the way I wanted to on a big stage. I think it’s a good start,” she said.

Entering her first season as a senior internationally, Wakaba Higuchi came in fifth place with a score of 116.99. Some of her jumps were singled and doubled instead of tripled.