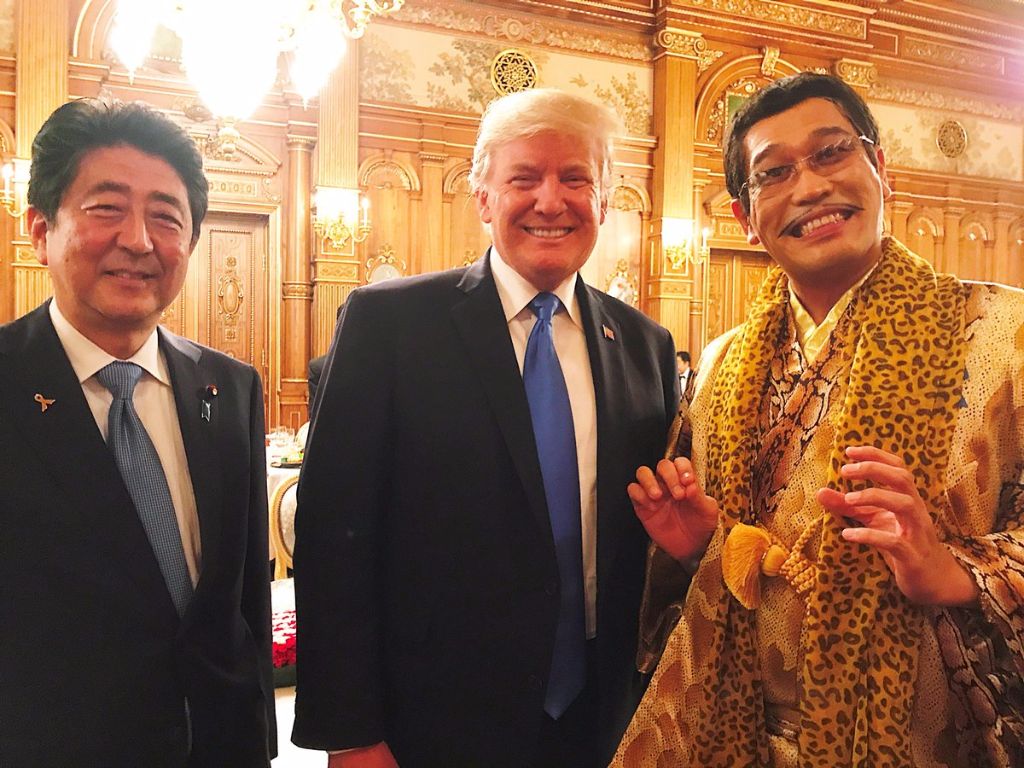 Living breathing meme Piko-Taro had the opportunity to meet with both Japan and The United States’ leaders, Shinzo Abe and Donald Trump.

President Trump is currently on a 12 day international tour in Asia, officially beginning his tour in Japan. Prime Minister Abe hosted a dinner party for Trump, with the guest list featuring a plethora of dignified Japanese politicians. Out of thosePiko-Taro seems to be an odd choice for a guest invite.

The comedian, whose real name is Daimaou Kosaka, was virtually unknown prior to the release of his hit song “Pen Pineapple Apple Pen”. The song eventually became viral worldwide and has amassed over 240 million views between the upload on Piko-Taro’s official youtube account, and the other official upload via UltraMusic.

Piko-Taro tweeted pictures of the three together, with the comedian decked out in his signature leopard print outfit.

President Trump and Prime Minister Abe ??! It is an honor!#ppap #pikotaro pic.twitter.com/MfhzU6TQ4n

It’s been said that Piko-Taro was initially invited due to a connection the singer has with President Trump. Last year Trump’s daughter Ivanka shared a video on Instagram of her daughter – and the President’s granddaughter Arabella performing Pen Pineapple Apple Pen. Piko-Taro saw the video and shared his delight on Facebook. Prime Minister Abe himself even mentioned that he saw the video of Arabella. During a meeting with Trump in November2016, he told him that he’d never seen such a cute version of PPAP.

Apologies in advance—this may be stuck in your head all day. #PineapplePen 🍍🍎🖊

Furthermore, the Japanese Foreign Ministry got Piko-Taro to record a special message for the annual cherry blossom reception in Washington, both Ivanka Trump and Arabella were in attendance.

I have had a very valuable experience in my life today. Also, I just make fun music. And I want to deliver a small smile to everyone. pic.twitter.com/8D0ltQezOr