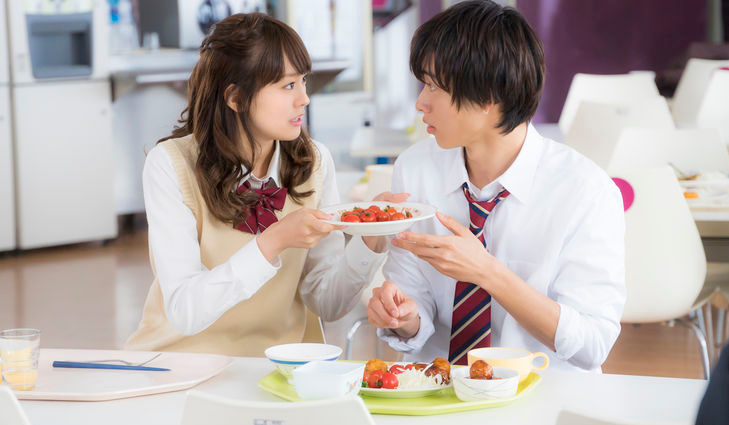 The film’s trailer has also been released and it previews the movie theme song “Torisetsu”. The film will open on September 19.

Hatori: Rita!
Hatori: This guy’s name is Rita Terasaka, this story’s “hero,” in one sense of the word.
Hatori: I, Hatori Matsuzaki, am the heroine that will marry Rita.
Hatori: He’s my childhood friend, and I’ve been by his side watching over him since we were little.
Rita: I’ve decided to go out with Adachi.
Hatori: Whaaaaaaaaaaat?!
Text: Continuing from Ao Haru Ride and Strobe Edge, a long-awaited popular shōjo comic film adaptation.
Kyoko: Those two have great chemistry. Is that fine with you?
Hatori: I’m cute, and know everything about you! You’d regret passing me up!
Kyoko: You don’t know anything about Rita, do you?
Hatori: What is up with this dumb jock?
Kōsuke: Kousuke Hiromitsu. If you want, I’ll make you forget him.
Hatori: Nakajima!
Adachi: I’m Terasaka’s girlfriend!
Rita: Everything I don’t have, she has so much of. I’m by her side. Sorry.
Hatori: You don’t like me, even a little?
Rita: I’m sorry if I hurt you.
Hatori: Hiromitsu.
Kōsuke: It’s fine, even if I’m the only one who sees.
Rita: After all, you’re only playing around with her.
Kōsuke: And if I was serious?
Text: The person that I love…
Text: The person that loves me…
Text: Who am I destined for?
Hatori: I’m a hero too! The only one in the whole world!
Hatori: Heroine Shikkaku