Following up on a particularly busy year, six-piece fusion rock band Suchmos have announced that they will be releasing their second studio album next year on January 25th.  Titled “THE KIDS”, this record will include 11 songs such as the band’s slow-burning hit “STAY TUNE”, as well as other previously released tracks like “MINT”, “DUMBO”, and “BODY”.

In addition, the album’s Limited Edition will come packaged with a DVD which contains live footage from the group’s October concert at Tokyo’s LIQUIDROOM venue.  Last but not least, Suchmos will be celebrating the album’s release date by holding a live event at Studio Coast with fellow fusion act cero, for which tickets will be available (via Suchmos’ website) starting on December 12th.

Read on below for a look at the cover and track list for “THE KIDS” and expect further updates as we approach the record’s release. 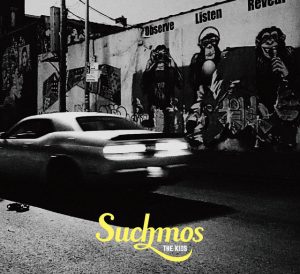