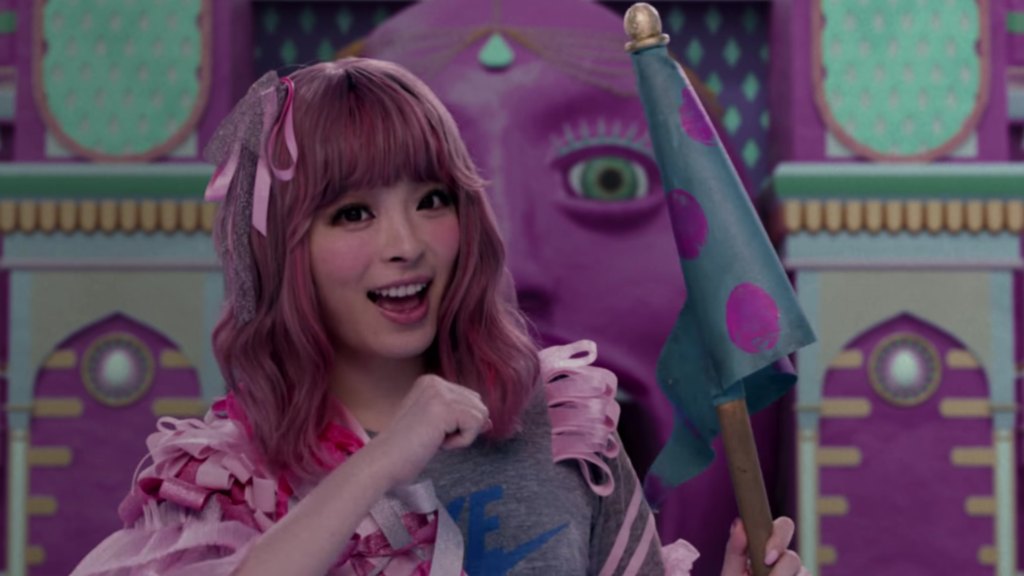 Let’s be honest: with “HARAJUKU IYAHOI”, most people (including me) saw a glimpse of hope in Kyary Pamyu Pamyu‘s career. After almost three years of completely shallow and boring music -leaving aside a few exceptions- the audience finally got a catchy and enjoyable track coupled by a super nice Music Video, which is everything the fans (and Kyary herself) needed at that point. The intention of putting the singer back on track was apparently clear: even just the fact the song title had the name “Harajuku” in it was giving fans hope, as the correlation between the singer and the internationally famous fashion district of Tokyo drifted down into the abyss during the course of her career.

Yet, we were all were wrong. There’s no intention of putting Kyary back on track. There’s no hope for her career. She was, is, and will always be nothing more than a marketing puppet. A face corporations and companies use to promote their products. It’s the same story: she’s in the music industry exclusively to expose some sort of product, with no interest whatsoever in the artistic side, nor in her personality, the reason why she stepped into this world in the first place. Of course, “Easta” is no exception to this philosophy, being the CM of an Easter campaign ran by some sort of supermarket chain, exactly as the B-side coupling this track in her upcoming single. Don’t get me wrong: several mainstream artists make collaborations with famous brands, and wether you like it or not, they need it. The problem is, Kyary’s career is entirely based on commercials. Which, as you can guess, is a different approach that leads to a different result.

This wouldn’t even be a problem if these songs and videos weren’t completely bland and uninspired. At the same time, though, I don’t feel like completely blaming producer Yasutaka Nakata: he just does the job he’s asked to do, and clearly has no interest in making something engaging for the audience, since even he knows there’s really nothing interesting about Kyary anymore. Even if he actually wanted to make a club banger everyone wants to jam to, it wouldn’t be worth the time (it’s all about time for him) as the expectations for a new Kyary single are incredibly low before it even comes out: people just aren’t interested in her anymore. And while this is partly Nakata’s fault, he knows it’s too late to save this girl’s career. He completely lost the creative control on Kyary’s music after the amazing “Nandacollection” (2013), when she pretty much started doing CM-only tracks, and gradually lost her identity as Harajuku icon and relevant Pop act.

And so, here we are today, with yet another tedious tie-in track from Kyary Pamyu Pamyu. Even the video, once a great means of expression for her personality, is incredibly boring, but most of all, sad. Look at that dying color palette. At the expression on her face. At how all of this is incredibly depressing and forcedly recycled, just for the sake of putting out yet another useless track to promote some sort of campaign put up by yet another chain or corporation.

This is the girl that put out one of the best J-pop records of 2013, trying to desperately survive between the ruins of the success she destroyed with her own hands.

Kyary Pamyu Pamyu‘s new single “Easta” is out on April 5th. Be sure to let us know what you think about this MV down here in the comments.