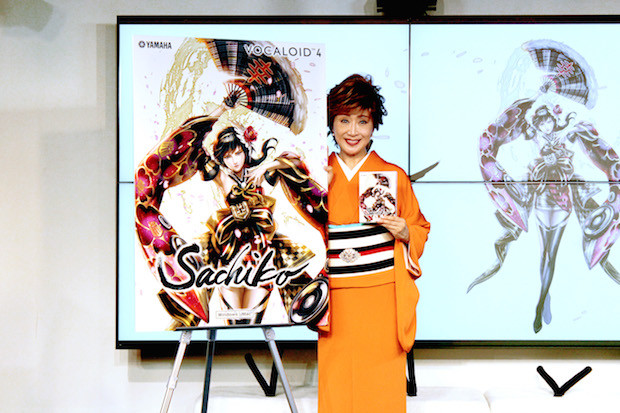 Vocaloid just added an new interesting voice to their catalogue, and this time it’s an enka singer’s. That’s right, it was announced that the famous enka singer, Sachiko Kobayashi, known for her extravagant Kouhaku costumes, is coming to you in Vocaloid-form. This new vocaloid is named Sachiko, after her real life counterpart and her first album was released this past Monday in the Vocaloid Shop.

At the event, they discussed the development behind Sachiko’s character and the intricacies of basing her on Kobayashi. According to Yoshida, careful attention went into researching Kobayashi’s style and personal characteristics and making sure that the final product looked and sounded new, but also remained “Kobayashi-esque.”

Kobayashi had a very new experience recording for Vocaloid.

“We at YAMAHA are very satisfied with what we’ve accomplished,” Ishikawa stated. “It couldn’t have been done without everyone’s hard work, and we hope that you enjoy what we’ve delivered.

Kobayashi herself encouraged people to give the new album a listen. “Doing this for the first time was very exciting! I hope that everyone everywhere enjoys this work.”

Towards the end, Kobayashi even teased the possibility of an English release. “The only problem I have is pronouncing [English], so I may have to take some English classes before then!”

The event also featured Sachiko’s song Embrace The Stars, which shocked those in attendances, including Kobayashi! Check out the song below!