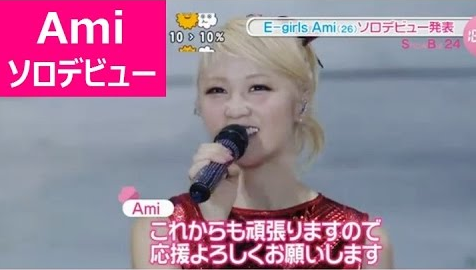 It was announced that E-girls member Ami will be making her solo debut this summer. The announcement was made during the final day of the group’s concert at the Saitama Super Arena.

During encore, the message was displayed on a monitor and drew a huge cheer from an audience of 24,000. This is the first solo debut from the group. The CD will be released in summer this year, title is still undecided.

After the announcement, Ami says she is suprised herself. After receiving applause from fans she says “I felt relieved hearing your support. I will work hard”. She added “This summer marks my 14th year of debut since joining Dream. With this new challenge, I hope to show everyone a different expression from me.”