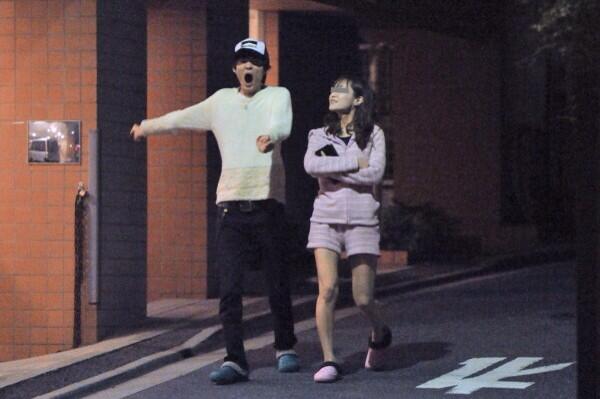 Hello everyone! I have here a translation of an article that has been on Messy recently talking about Hey!Say!JUMP’s Takaki Yuya, Yabu Kota and Kanjani8’s Shibutani Subaru and their rumoured girlfriends.

Hey!Say!JUMP member Takaki Yuya appeared in the latest issue of Friday magazine under the title “Passing a copy of his key to a lover”. His partner is bikini model Hara Aimi, a member of super sexy unit called “Beautiful Legs Squadron Slender DX” (美脚戦隊スレンダーDX).

According to the article, they have been acquainted for about a year and have reportedly caught Hara going in and out of Takaki’s apartment with a duplicate key. Also, as a bikini model she is still unknown, she has been working at a part-time job as a hostess in a club in Roppongi. Because of that she has been frequently in the area of Roppongi which could have possibly been how they met.

He asked her to leave her job as a hostess from the beginning and despite the fact that now she is focusing on her celebrity career, Takaki pays the full rent of the apartment, even though they are both living there together. By the way, the fact that she deleted her last update on her official blog on the 14th has possibly been a big influence on this scoop.

It was reported on 5 September that Kanjani8’s Shibutani Subaru is living together with E cup idol Aoyama Reiko. Since that there have been many comments on twitter like “Where are you going home now? To Shibutani’s house?” from Shibutani fans which turned into an uproar.

In May, another member from Hey!Say!JUMP, Yabu Kota, has also been seen living with an older woman, who is a heavy drinker. After the information was released, a picture of them kissing has been going around on the internet, which has disappointed a lot of fans.

Within Johhny’s, there is an unwritten rule in which idols having a relationship is considered taboo, but still there have been these kinds of scoops from countless members. Latetly it has been common to see the couples living together. This is why we wonder if they think that, instead of going on dates, this way they can flirt with their partner in peace.

We feel like the fact that they are following the formalities of renting an apartment together, and both their parents (depending on the situation) giving permission to them living together, etc. will bring more problems. Or maybe they are just want to ensure a place where they can spend time alone. If they aren’t to be married and they split up, we wonder who will have to leave the apartment. This would probably bring them even more problems.

This seems to be becoming something standard between Johnny’s talents. Fans seem to be worrying about other things, and their love circumstances are becoming more lively.