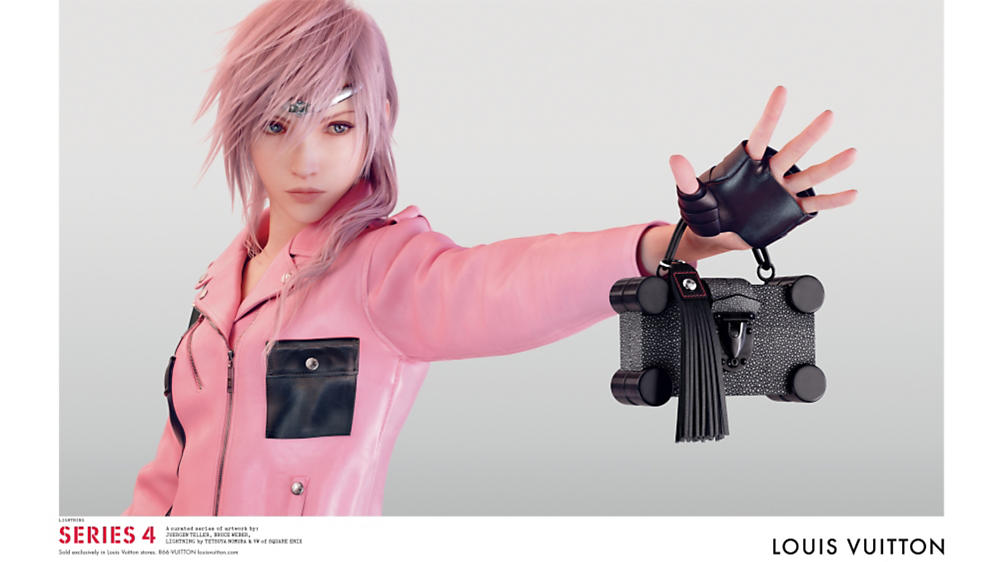 The ad campaign for French fashion house Louis Vuitton’s spring/summer 2016 collection has been released. One of the stars of the ads is Lightning, a character from the “Final Fantasy” line of video games. The images are credited to Square Enix’s Tetsuya Nomura. Of the campaign, he said, “The stunning new look of Lightning, including her poses and character in action, was fully produced by Louis Vuitton. Additionally, thanks to the Visual Works team, they were able to produce brilliant work under a tight schedule. This collaboration is not just a promotion of a game, and it is a great honor that the character herself received an offer from a world famous brand. As a result of this collaboration, this has infused new breath into the character, Lightning.”

Lightning herself had something to say about the ads. “My clothes were nothing more than armor to stay alive; ‘dressing up’ was a concept I’ve never had. Perhaps that makes me an unseemly choice as ambassador,” she says. “But this experience has opened my eyes. Fashion isn’t something you’re taught or given; it comes from your own taste and your own choices. It displays the essence of who you are to those around you. It makes me feel excited, a feeling similar to when I venture to unknown lands.”

Nicolas Ghesquiere, Louis Vuitton’s Artistic Director of Women’s collections, said of the the campaign, “It’s clear that the virtual aesthetic of video games is predominant in this collection. If we push the reflection about heroines, or what might constitute the nature of a woman whose actions can be so courageous that she becomes superior and iconic, it becomes obvious that a virtual entity integrates with the founding principles of the Maison.” He continued, “Lightning is the perfect avatar for a global, heroic woman and for a world where social networks and communications are now seamlessly woven into our life. She is also the symbol of new pictorial processes. How can you create an image that goes beyond the classic principles of photography and design? Lightning heralds a new era of expression.”

The ads will appear in February magazines worldwide, starting today with subscribers of Harper’s Bazaar in the U.K.