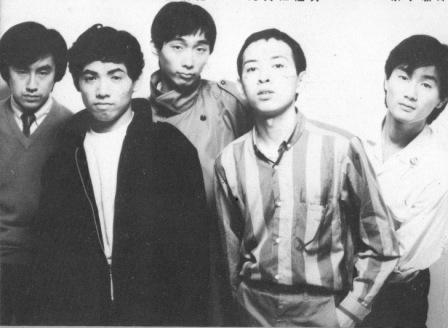 Legendary new wave artists HALMENS recently revealed that they intend to return for their 35th anniversary as a new unit, known as HALMENS X.  The group under this new moniker will be bringing a brand new album of 20 tracks, called “35 Seiki“.

As well as the HALMENS X album, the group will be bringing an anniversary release of the HALMENS compilation album “Halmens Deluxe” with 11 bonus live and demo tracks. This marks the first time the compilation has ever been put on CD.

Halmens are one of the most legendary bands in the Japanese New Wave scene, and launched many careers for those involved, including Koji Ueno (who went on to create Guernica with Jun Togawa and his own career), Higae Takao and Senzui Toshiro both became members of Yapoos, and vocalist Saeki Kenzo went on to perform in his own group. Both 35th Seiki and the reissue of Halmens Deluxe are scheduled to be released on the 21st of September. Here are the tracklists:

Halmens Deluxe was originally released the 21st of June 1984 and features guests such as Maki Nomiya and most notably, Jun Togawa, who was at the time, launching into the music consciousness. Infact, a lot of these tracks were features on her debut album, Tamahime Sama in newly recorded and arranged form.

35 Seiki is the first album under the HALMENS X name, bringing along a slew of guests including Keiichi Suzuki, Maki Nomiya and Dempagumi Inc.‘s Nemu Yumeni.

Surely one of the most exciting and surprising releases this year for any fans of the band and 80s New Wave scene in general, it will be interesting to see how the new album turns out and wonderful to get hold of Halmens Deluxe on CD for the first time.

Both will retail at 3,000 yen including tax. Available for preorder now.