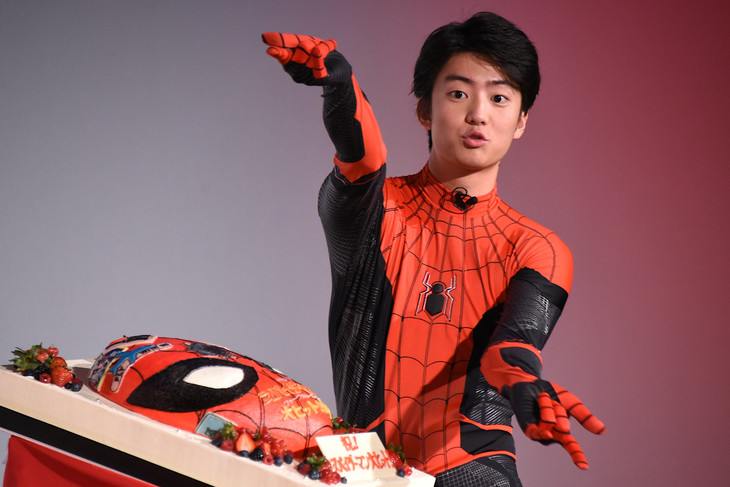 Popular up-and-coming actor Kentaro Ito recently took his cosplaying skills to the test at an event promoting the film “Spider-Man Far From Home“.

The film had it’s Japanese premiere on June 28th, 2019. Set after the events of “Avengers: End Game”. Overwhelmed over questions about the fate of Tony Stark/Iron Man, Peter Parker (Tom Holland) and his friends decide to travel to Venice for some fun.

Naturally, trouble follows them as Peter takes on Mystero (Jake Gyllenhaal) and his dangerous illusions. The film has already been an immediate success, already grossing almost 600 million USD at the worldwide box office. In comparison, in the same time frame it has grossed %146 more than the previous film “Spider-Man: Homecoming”.

At the beginning of the event a “mysterious man” dressed as Spider-Man made his way throughout the audience. At the center of the stage with his back turned to the audience, the mask was removed revealing Kentaro to the delight of fans yelling “You look so good!” “COOL“

Kentaro was feeling a little self conscious, as he told the audience “I’m honestly a little embarrassed, it feels like I’m naked“. Kentaro later stated that he’s a huge fan of the series, and it was a huge honor to be selected as the film’s Japanese ambassador.

He actually met Tom Holland at the Los Angeles premiere of the film, and was super excited as Tom is one of his big influences as an actor. Kentaro was also pumped to meet Samuel L. Jackson.

Check out photos and video footage from the event below!