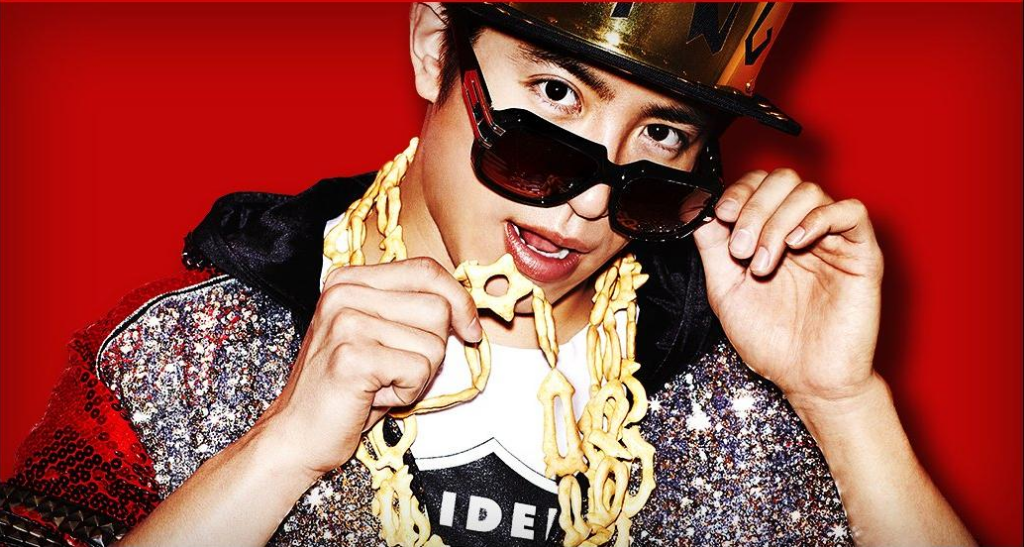 Kanjani8’s Murakami Shingo has taken on his KING persona for several of the group’s latest releases and is now taking it to another level.

Mysterious rapper TAKATSU-KING attended a PR event for the completion of the project “OTTOTTO”, a collaboration celebrating the 35th anniversary of the snack brand.

Who is TAKATSU-KING? He conducted a press conference to introduce himself and also released his newest music video. Check those out below!

TAKATSU-KING appeared wearing a necklace made of “ottotto”, a glittering jacket made for Lives, sunglasses, and a cap with a huge ‘KING’ written on it. When asked if this is OK with Kanjani8’s Murakami Shingo, he answered “There is no problem!”. He also refused to take off his sunglasses because, according to him, it’s his life.

Regarding Murakami, “He is practicing the piano today and told me that doing morning shows is very tiring.” Since it’s the product’s 35th anniversary and TAKATSU-KING is also 35 years old, he feels the collaboration is a good idea.

At the end of the event, TAKATSU-KING’s new rap song “OTTOTTO” was showcased for the first time, together with TAKATSU-KIDS.  The song is produced by TAKATSU-KING, lyrics/ composition/ arrangement by Peach, and choreography by dance unit s**t kingz.

The music video was also released at the product’s official site and YT channel and TAKATSU-KING is worried that the servers might crash. He works a lot overseas and says “Today it’s Marina, Marina Bay Sands, Singapore. I’ll go to various places. I’ll also go to Apollo, Apollo Theater.” In the end, he left the venue saying he has to call Justin Bieber-kun.