Rumors are swirling that Kanjani8 member Shingo Murakami is in a relationship with gravure idol and sportscaster Ruriko Kojima, and things seem to be getting very serious between the two.

According to tabloids reports, Kojima “arrogantly” made her entrance into a luxury Tokyo condominium complex where Murakami resides. She stayed overnight, and then the following day Murakami was seen existing the complex at around 2:00pm. Wearing a mask and cap he was trying to divert attention from himself.

Kojima was alleged to be seen again at the complex again not too long ago, where she arrived at around midnight via taxi. Murakami apparently just arrived 30 minutes prior, and was waiting inside to “welcome” her.

An anonymous TV reporter claimed that Murakami’s breakup with popular actress Erika Toda didn’t exactly go very well, so for now he’s swayed off of women who could be described as the same type as Toda. While they didn’t go further into details, Kojima is assumed to be a bit more rowdy and fun.

Koijima got her start in 2009 where she beat out over 30,000 applicants to win the 34th “Horipro Tarento Scout Caravan”. She’s continued to work regularly as a popular gravure model, talent, and even got into professional sportscasting. She previously worked with Murakami’s group mate Ryuhei Maruyama on the MBS television show Saturday Plus.

As expected it’s extremely unlikely that a statement will be made, even if it’s denying the relationship due to Murakami’s agency Johnny & Associates. Photos of the two (separately) outside the complex, and one together on the street can be found below the jump. 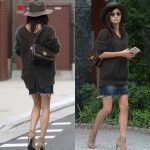