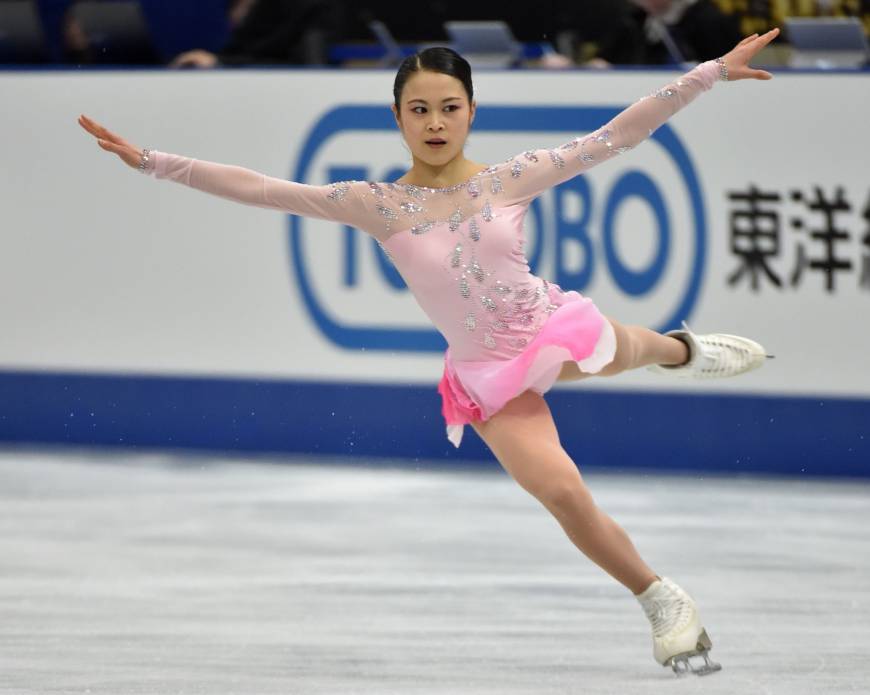 From November 10 – 12, this year’s edition of NHK Trophy took place in Osaka. This was the fourth event in the International Skating Union’s 2017 – 2018 Grand Prix Series. Out of Japan’s nine entries in the competition, none medalled.

Trouble reared its head on November 9 when Yuzuru Hanyu injured his right ankle during practice, forcing him to withdraw from the competition. He will be off the ice for the next three to four weeks, missing this season’s Grand Prix Final, an event that he has won for the past four seasons. He hopes to be back on the ice for the Japan Figure Skating Championships on December 20 – 24. The Japanese Olympic team will be announced at the end of that competition.

With Yuzuru out of the competition, the focus shifted to Satoko Miyahara, the reigning national champion. This was her first event since that championship, since she injured her hip 11 months ago. Satoko finished in fifth place with a total score of 191.80. Satoko’s short program received a score of 65.05, putting her in sixth place. Satoko’s planned opening jump, a triple lutz / triple toe, didn’t go as planned. The first jump was underrotated, while the second was doubled. Her spins received level fours, but her step sequence was only given a level three. “While on the ice I didn’t feel that I was doing well, so I was worried,” Satoko said. “But I didn’t have any major mistakes like falls, so I felt relieved.” Seeing as how she hasn’t competed in nearly a year, Satoko thought that she’d be nervous, but that wasn’t the case. “I was worried beforehand that I would be nervous and my legs might be shaking, but I was fine.”

Satoko’s free skate received a score of 126.75, placing her in sixth for that portion of the event. Satoko underrotated the second part of her planned triple lutz / triple toe loop combination as well as a double axel. She also a doubled a planned triple salchow. This poor showing means that Satoko will not qualify for the Grand Prix Final, an event where she has placed second for the past two seasons. But even more importantly, her bid for the Olympic team is in jeopardy. Her injury and time off the ice has definitely affected her. “I was happy to execute the triple / triple. It has been a long time since I did it,” she said. “I was able to skate as I practiced.” Satoko is having stamina issues though. “The problem is that I don’t have enough energy now. I need more power to improve my condition.”

Rika Hongo finished in seventh place, with a total score of 187.83. Rika’s short program was ranked fourth, with a score of 65.83, 4.21 points behind Russia’s Polina Tsurskaya. Rika’s error-filled free skate was given a score of 122.00, putting her in seventh for that portion of the event.

Yuna Shiraiwa, making her senior Grand Prix debut, finished in eighth place with a total score of 171.94. Her short program was ranked eighth, with score of 57.34. Her free skate also ranked eighth, with a score of 114.60. Her free skate started off well, but then didn’t end that way. She opened with a triple lutz / triple toe combination, but when she did that combination again, she two-footed the landing on the second part. Later in the skate, she messed up her three jump combination by only doing double axel. This was followed by her doubling a planned triple loop.

Due to these dismal results, this is the first time that Japan has not won a medal in the men’s or women’s competition at NHK Trophy since 2000.

The pairs of Sumire Suto & Francis Boudreau-Audet and Miu Suzaki & Ryuichi Kihara were in the bottom two (seventh and eighth, respectively), with total scores of 156.52 and 139.98, respectively.

The ice dancing teams of Kana Muramoto & Chris Reed and Misato Komatsubara & Timothy Koleto were also in the bottom two (ninth and tenth, respectively), with total scores of 156.41 and 132.41, respectively.