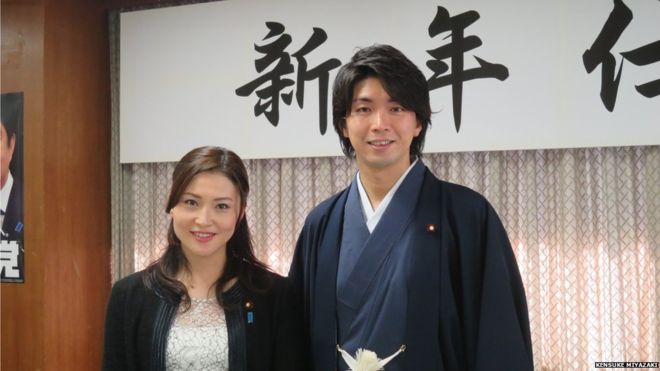 Right on the heels of Becky and Kawatani Enon’s adultery scandal, another scandal involving a politician has captivated headlines. Formerly praised as an “ikumen” for taking a paternity leave, member of the House of Representatives for the Liberal Democratic Party Miyazaki Kensuke has fallen under much scrutiny for being embroiled in adulterous affair while still serving in office. It has been said that Miyazaki brought his mistress into his home just as his newlywed wife was giving birth. Due to the controversy the scandal caused, Miyazaki chose to step down from his position.

Miyazaki Kensuke was married once before to Kato Ayuko, whom he divorced after three years of marriage in 2009. He then married a fellow member of the Liberal Democratic Party, Kaneko Megumi. Shortly after, Kaneko gave birth to their first child in January of 2016. Miyazaki became a hot topic in Japan for deciding to take a paternity leave, being the first member of the House of Representatives to do so. This is a rarity in Japan, and Miyazaki gained both criticism and praise along with worldwide attention. He announced on his blog that he would be taking a paternity leave to “help [his] wife and raise [his] child.” In addition, Miyazaki spoke of plans to normalize paternity leave and pave the way for more men to take paternity leave as well. The story was much talked about, and boosted Miyazaki’s popularity, who had also previously gained attention for his handsome looks as an “ikemen” or good looking man. Miyazaki and wife, who is pregnant with their first child.

However, Miyazaki’s boost in popularity as an “ikumen” or man who helps in child rearing, took quite a hit when it was revealed that he was in fact having an affair. The ever-crafty Shunkan Bunshun managed to get the scoop that Miyazaki had even brought his mistress into his home just as his wife was about to give birth. His mistress was identified as “A,” a woman who once was a television talent but who now prefers to remain anonymous. However, her identity has already been revealed to be talent and bikini model Miyazawa Mayu, pictured below. In such a short period of time, Miyazaki’s image took a sudden turn. Once regarded as a prime example of a good husband and father, he now was under much public scrutiny for such a callous act. Shortly after his affair was revealed, Miyazaki announced that he would be stepping down from his post in the Liberal Democratic Party. At the very least, paternity leave would no longer be a necessity to him. Miyazaki held a press conference to apologize, deeply bowing and saying, “To an exceedingly immature person like me, my desires as a human won.” In the same press conference, he also revealed that he would be resigning. Miyazaki offered apologies to his wife, family, and supporters, and also noted that while he may have sullied the movement to normalize paternity leave with his actions, he still hoped that the important discussion would be continued, despite his no longer having a place in that discussion. As far as it is known, the resignation was his choice.

Recently, his mistress appeared on television, albeit anonymously despite her face already being revealed, and spoke of her affair with Miyazaki. She claimed that she and Miyazaki had shared friends on Facebook, so she sent him a friend request. From there, the two became acquainted, and she claims he began his extreme attack from there. According the mistress Miyazawa, who gave the tearful television interview with her obscured, she and Miyazaki sent as much as 400 messages per day on the popular social media app “Line.” After that, the pair secretly met two times, and Miyazaki allegedly sent messages saying “You are the sonata within me” and “I like you.” Then, Miyazaki invited her to Kyoto. Miyazawa says “I had guilty feelings, but I also had feelings that could not be stopped.” About her decision to continue the affair, Miyazawa stated, “I wasn’t trying to destroy his family and didn’t think that he should break up with his wife, I was purely smitten with him and thought that I wanted him to try his best. I thought that if he had a place of comfort then he could give it his all for his family and his work. I understood that it was adultery, but there were unstoppable emotions.” She also hinted that there may have been more women. “Miyazaki-sensei is wonderful, and he has the power to draw in people, so when I asked ‘Did you have a girlfriend before me?’ he replied ‘Yup’.”

The scandal is still a hot topic in the Japanese media at the moment, and even in news publications outside of Japan. Due to the nature of the recent Becky scandal, Miyazaki allegedly instructed his mistress to erase the Line messages. Currently, it has been assumed that Miyazaki’s wife, Kaneko Megumi, has forgiven him for the affair, but the true fate of their marriage is unknown.