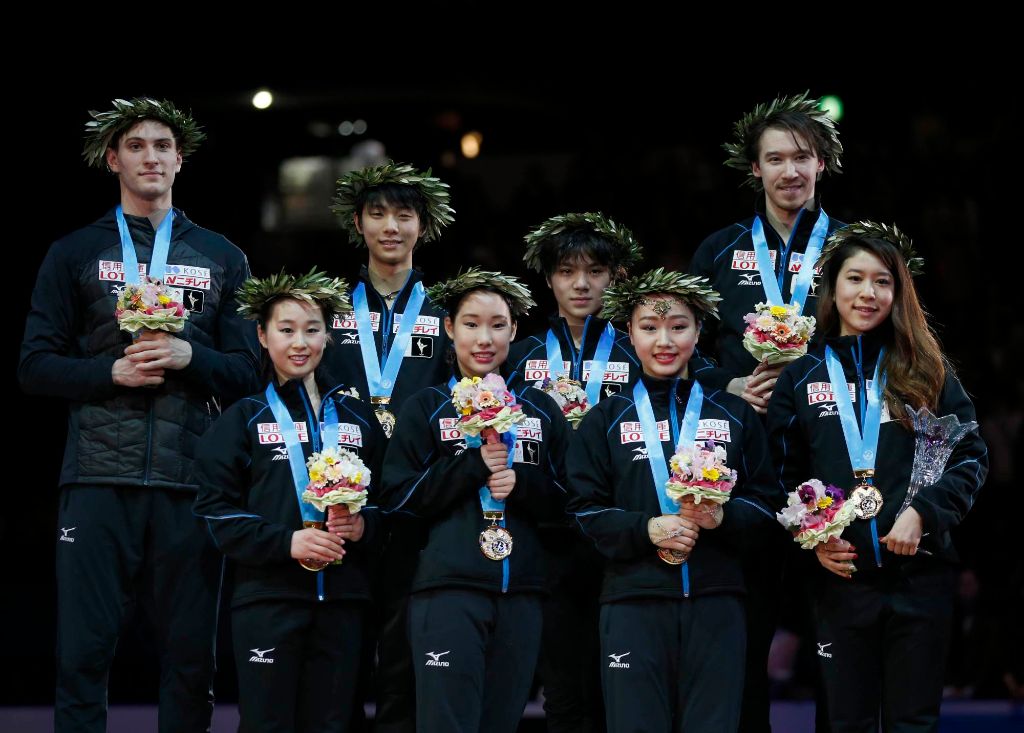 From April 20 – 23, this year’s World Team Trophy took place in Tokyo. Japan won the event, the second time out of the five times the event has been held, with a score of 109 to Russia’s 105. The Japanese team was composed of Yuzuru Hanyu, Shoma Uno, Wakaba Higuchi, Mai Mihara, Sumire Suto & Francis Boudreau-Audet, and Kana Muramoto & Chris Reed.

In the men’s short program, Japan came in second place with a score of 18, a point behind the United States’ score. Shoma Uno had the best short program of the men’s event, scoring 103.53 and winning 12 points for Team Japan. His score was 4.25 points higher than the second place finisher, American Nathan Chen. Shoma landed a quad flip, a quad toe loop / double toe loop combination, and a triple axel. “I was supposed to do a quad / triple on the combination, but my second jump was not good this morning at practice,” Shoma said. “Because this is a team event, I did not want to make a huge mistake that might cause trouble for us, so I just did the quad / double.” Shoma’s dealt with his short program issues by repetition, saying, “My short program has gotten better this year because I can compete at a certain level even if I’m not fully focused. Through all of my practice, I have been able to overcome my fear of doing the short program.”

Yuzuru Hanyu’s short program was ranked seventh, with a score of  83.51, winning six points for the Japanese team. He singled his opening planned quadruple loop, then put both hands on the ice on what was supposed to be a quad salchow / triple toe loop combination. “I’m so disappointed with my program today. I feel sorry for the other team members,” Yuzuru said. “I did a lot of preparation and pushed myself for this competition, but somehow it didn’t go well. I’m starting to develop a negative image about the short program and I need to fight through this.” After his world record free skate at this year’s World Championships, he knew expectations would be high for his free skate. “I think a perfect performance will be expected after Worlds. There will be pressure and expectations from the fans, and I want to transform those into power.”

In the men’s free skate, Japan won with a score of 23 to US’ 16. Yuzuru bounced back, placing first with a score of 200.49. He opened with a quad loop, but then singled his planned quad salchow. He made up for that mistake by doing a quad toe loop / single loop / triple salchow combination in the second half of the program, instead of the triple axel / single loop /triple salchow he did at Worlds. This change in strategy marked a new accomplishment for Yuzuru. “It’s the first time I have done that combination. I was able to come down solidly, but not perfectly. I am satisfied to a certain extent.” He continued, “This competition is not something where I compete with the other skaters in terms of total score. So that was something that was on my mind as I skated throughout the program. But at the same time, when I was at the World Championships, after the short program I was about 10 points behind the top skater (Javier Fernandez). Yesterday it was about 20 points difference, which is a huge difference.” Yuzuru did what he said he would do to the day before. “I was able to gear the energy from all the people in the audience to my somewhat satisfactory performance.”

Shoma’s free skate was ranked second, with a score of 198.49, winning 11 points for Japan. He opened with a quad loop, followed by a quad flip, but had an edge call on his triple lutz. He botched the second jump of his quad flip / double toe loop combination, but followed that with a quad toe loop. After his skate, Shoma was asked if fatigue played a factor in his free skate at the end of a long season. “I actually wasn’t too tired after the World Championships,” he replied. “I don’t feel like I had to go through a major competition. It was just a part of the process. I don’t feel any more tired than I would usually.” On the contrary, he believes his stamina has increased since Worlds. “During the World Championships I think I was able to raise the base level of my stamina. During practice I was rarely able to land the quad loop, but I started to be able to succeed. I was even able to put in the flip and make it work. I think I was able to raise my game.” Shoma also said that he was not out defeat Yuzuru as this competition. “I already knew that Yuzuru would be #1, so it didn’t occur to me that I wanted to beat him. It’s not that I don’t think I could ever win over him, but this is a team event. So I think we consider each other rivals, but we are also competing for the same team here. I wanted us to be first and second in the standings.”

If this were a regular competition, Shoma would’ve won with a total combined score of 302.02. Yuzuru would’ve been in third with a score of 284.00, .52 points behind American Nathan Chen.

In the women’s short program, Japan came in second place with a score of 18, five points behind the Russia’s score. Mai Mihara had the third best short program of the women’s event, scoring 72.10 (a new personal best) and winning ten points for Team Japan. Her score was .11 points lower than the second place finisher’s, Russia’s Elena Radionova. Mai opened with a triple lutz / triple toe loop combination, followed by a double axel and a triple flip. “I was so happy I was able to land the flip because I missed it at the Worlds,” she said. “I have been practicing it really hard. At one point I landed the flip 15 times in a row.”

Wakaba Higuchi’s short program was ranked fifth, with a score of 71.41 (a new personal best), winning eight points for the Japanese team. Wakaba opened with a double axel, followed by a triple lutz / triple toe loop combination and a triple flip. “I was disappointed in my results at the Four Continents, so after that I practiced a lot with the music,” Wakaba said after her skate. “I worked on continuing through with my entire program even if I made mistakes in the middle.” She admitted that the stress of trying to help keep three spot at Worlds and the Pyeongchang Olympics for the Japanese women’s team affected her. “I was under a lot of pressure at the Worlds. I do feel more comfortable here, so I can actually be experimental.”

In the women’s free skate, Japan won with a score of 21 to Russia’s 20. Mai’s free skate was given a score of 146.17, the second best of the night, winning 11 points for Team Japan. Her score was 14.29 point behind the first place finisher’s, Russia’s Evgenia Medvedeva. However, Mai’s free skate score was a new personal best and a new Japanese record, beating Satoko Miyahara’s score of 143.69 at last year’s Grand Prix Final. Mai opened with a triple lutz / triple toe loop combination, cleanly landing seven triples by the end of her program. She also received level-fours for her spins and step sequence and did not receive a single negative grade of execution. “I was nervous just like in the short program at the Worlds, but I looked at the team seats and everybody was cheering for me,” Mai later said. “They gave me the right push to go into my program. I knew all my teammates were doing their best and we were in the top ranks, so I went in with a very strong resolve.” Mai skated one skater after Wakaba and said she was motivated by her teammate’s high score. “I was amazed at Wakaba’s high scores, and I wanted to keep up with her. I’m really happy with my score. I didn’t know it was a record. I wanted to surpass 140.”

Wakaba’s free skate was the third best of the women’s event, with a score of 145.30 (a new personal best), winning ten points for Team Japan. During her skate, she landed seven triple jumps and earned level-fours for her step sequence and spins. “Today’s program will give me good momentum for next season. If I can skate my new programs like I did today, that would be good. Both Mai and me were able to perform a perfect short and free, so that was great.” When asked about the stress of competing at Worlds three weeks ago compared to this competition, Wakaba said, “I had pressure at the Worlds, but this was a team event so there were different types of nerves. I was not aiming for 145 points. I was hoping to go over 130 because I thought that would be a good score for this season. Now I have to renew my goal for next season.”

If this were a regular competition, Mai would’ve come in second with a total combined score of 218.27, 23.04 points behind Evgenia. Wakaba would’ve been in third with a score of 216.71.

In pairs, Sumire Suto & Francis Boudreau-Audet finished in sixth place (last place) in the short program, the free skate, and overall. Each of their programs won Japan seven points. Their total combined score was 152.41.

At the event’s exhibition, Kanako Murakami took to the ice even though she was not part of the competitive team. When she was announced, the announcer said that this would be Kanako’s final performance as an active skater. During her career, Kanako won a World Junior Championship, and placed second and third at two Four Continents Championships. She represented Japan at the 2014 Sochi Olympics, where she finished in 12th place. Her reason for retiring was simple: “I haven’t been able to produce results, and it occurred to me that I had reached my limit.”