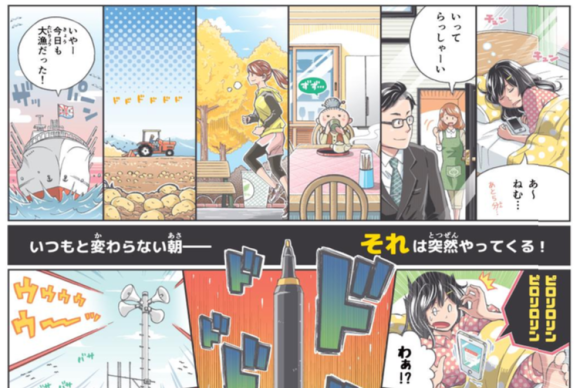 North Korea has taunted Hokkaido with two missile flights this year, first in August and again a few weeks later in September. The Hokkaido government reacted to the missile threat by producing a manga that gives advice on what to do when the sirens alerting of missiles go off.

The manga was drawn by Manabu Yamamoto who has worked with the Hokkaido officials previously on a crime-preventing project. The Hokkaido government is distributing the manga through their website as a digital pamphlet.

The manga opens up with a scene of a group of people in different everyday situations: a girl is trying to sleep in, a man is leaving for work, a farmer and a fisherman are working outside in the open, an elderly lady is hanging about her home and a woman is on a morning run. The manga proceeds to give information on how to act in all of these situations if the sirens suddenly alert about a missile.

The advice varies depending on a person’s location. If possible, one should try to avoid going outside. People outside should look for a building nearby to go into and while doing so, avoid big walls of glass. If there are no buildings close, a place with most shadow has to do. Avoiding vehicles is of essence because they contain a lot of flammable gasses. In every scenario covering one’s head is important.

For more detailed advice and a selection of screenshots, head over to Japan Today’s website.