Legendary alternative icon Jun Togawa teamed up with iconic noise group Hijokaidan earlier this year to release their album “Togawakaidan“. After touring the project in February, now the artists have announced a live album to go along with it. Read more after the jump!

Jun Togawa fans were shocked to hear that she was returning to the studio for a major release earlier this year- and to be teaming up with Hijokaidan (who are known for doing exciting and unconventional collaborations) was even more thrilling. The end result was very good, though admittedly a little thin on the Jun Togawa x Hijokaidan material itself (most of the album being made up with solo Hijokaidan live material).

However, this album is looking to rectify that- and may very well become the definitive Togawakaidan experience- not only does it have more songs featuring Togawa (all reworked classics), but they’re also presented in a solid block- this indeed feels more like what fans were expecting the first time round.

The album, simply named “Togawakaidan Live” is due for release on July 20th. The material itself was recorded on February 21 at Akihabara GOODMAN. Fans, get ready for a second round of TOGAWAKAIDAN. Hopefully this time, it feels more… ‘complete’.

The cover and tracklist are: 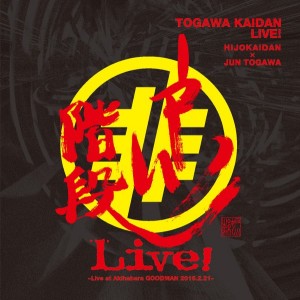 Here is a “Nikuya no Youni” (originally by Togawa’s group “Yapoos”) from the original “Hijokaidan” studio album to whet your appetites: