Johnny’s talent Hideaki Takizawa is making his final rounds of promotional activities. Back in the summer it was announced that his group Tackey & Tsubasa would be officially disbanding.

Furthermore, at the end of 2018 Takizawa announced that he will be retiring from entertainment activities to focus on a more behind-the-scenes roll in Johnny’s Entertainment.

In the upcoming issue of “The Television” Takizawa will grace the cover for the very last time. There’s an in-depth interview detailing his time in Johnny’s so far, along with details of his personal friendships with many other Johnny’s talents. These include V6 member Ken Miyake, Arashi member Jun Matsumoto, and KAT-TUN member Kamenashi Kazuya making it a must buy for fans.

He will also be covering the latest issues of “Monthly TV Guide” and “Monthly The Television”. 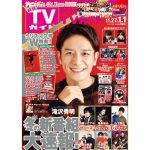