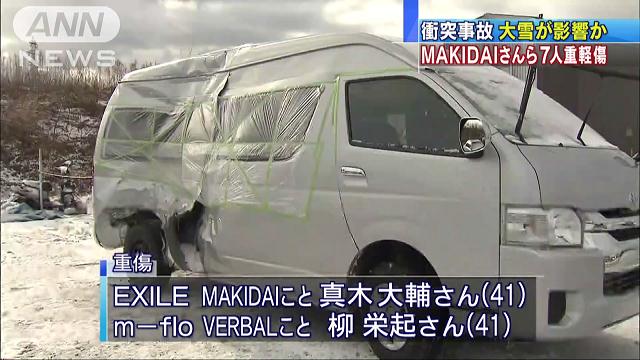 On December 23, tragedy struck outside Hakodate, Hokkaido. LDH’s unit PKCZ (composed of former EXILE member MAKIDAI, m-flo’s VERBAL, and DJ DARUMA) was involved in a car accident along with several of their staff. The vehicle they were traveling in collided with a large oncoming truck while they were exiting the parking lot of a roadside convenience store. Icy roads are suspected to be the reason for the crash. The group was on its way to Sapporo so that PKCZ could perform at a Sandaime J Soul Brothers concert, a concert which was later canceled as a result of the accident.

MAKIDAI’s injuries from the accident include broken ribs, a lung contusion, a concussion, and bruises. VERBAL is also suffering from broken ribs and a lung contusion. DJ DARUMA has neck pain. Two male staffers in their 30s were injured, one with a broken left foot and another with chest pain. Another staff member, a woman also in her 30s, has chest pain as well.

Taku Takahashi, VERBAL’s partner in m-flo, spoke to him and tweeted about it, saying “As you may have seen on the news, Verbal was injured in a car accident. He broke his ribs badly. I was worried and called him up and found out that he is thankfully conscious, which made me feel a bit relieved. I am praying that he has a speedy recovery. Also, I am praying for other artists and staff who were in the car.”

We here at Arama! Japan wish everyone a speedy recovery after this horrific event!

New report on the accident: