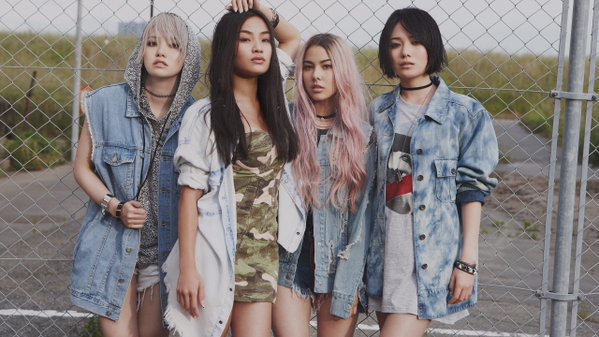 FAKY has spent the past few days releasing video teasers on YouTube. There was also a countdown on their site, which ended today. The result is the opening of FAKY’s new website, which is in Japanese and English. The site features news, the previously mentioned teaser videos, and photos from the members’ Instagram accounts. There are also profiles of FAKY and its members.

Of special note is the profile of new member Akina. The 15 year old, born to an American father and Japanese mother, has the role of “infusing the group with American culture.” After her birth in California, her family moved to Okinawa, and then back to the US. She then returned to Japan to join FAKY.  Akina has been taking vocal and dance lessons since she was 6 years old. She’s recently been working on her songwriting skills with her guitar. Akina is a fan of alternative R&B and electro, listing The Weeknd and Years & Years among her favorite artists. Vanessa Hudgens is her style icon. Due to moving around so much as a child, she’s good at making friends. She’s grown close to her groupmates. Anna says that Akina is mature for her age. Mikako notes her perceptiveness and says that she’s very much aware of her surroundings.

Also on the site, FAKY announced that they are now streaming 3 songs on various streaming sites in Japan. The songs are titled “Afterglow”, “You”, and “Candy.” The last 2 songs were previously heard on this site. “Afterglow” is a new song, but not the song that is featured in the video teasers. There is no word on that song. There is also on word on if the 3 songs that are currently being streamed will be available for purchase, physically or digitally. Streaming outside of Japan will come at a later date.