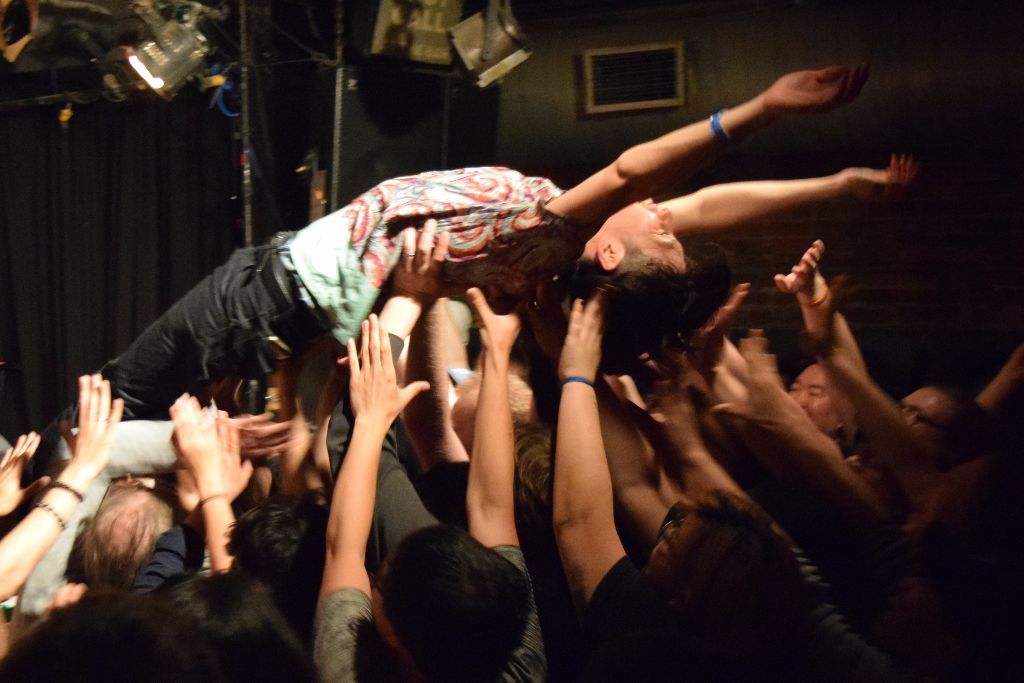 There’s been a lot said about Steve Tanaka, the founder and factotum of the Next Music from TOKYO tour, which kicked off its 10th iteration Friday the 19th of May here in Toronto at The Rivoli. This local anaesthesiologist flies in a skillfully selected handful of up-and-coming Japanese rock acts for an epic week of Canadian club shows. He also foots the bill for the whole affair, and walks away with a sizable debt each time. Tanaka’s motivation probably lies somewhere between cementing his own position as a powerful influencer in the Japanese indie rock scene, and the joy of surfing a crowd of townies losing their minds to music they’d have otherwise never heard.

Next Music from TOKYO is Steve Tanaka’s story—and it’s an interesting one—but what compelled me most about his eye for talent was the talent itself. Speaking little to no English, each band struggled to communicate with the venue’s audio engineer during that first sound check, and even the layout of the merch table was a hotly contested topic. The tension was infectious and dripped down from the walls of The Rivoli’s ambient-lit back room like the nervous sweat on Tanaka’s brow. Despite this, each act sounded fantastic, and reassured all but one staff member that the night would be one for the history books. As if the tour’s success wasn’t inevitable after so many years of fostering an ironclad reputation, Tanaka paced the room, seemingly unaware that an exhausted, capacity crowd would be leaving with the memories of an unforgettable experience. 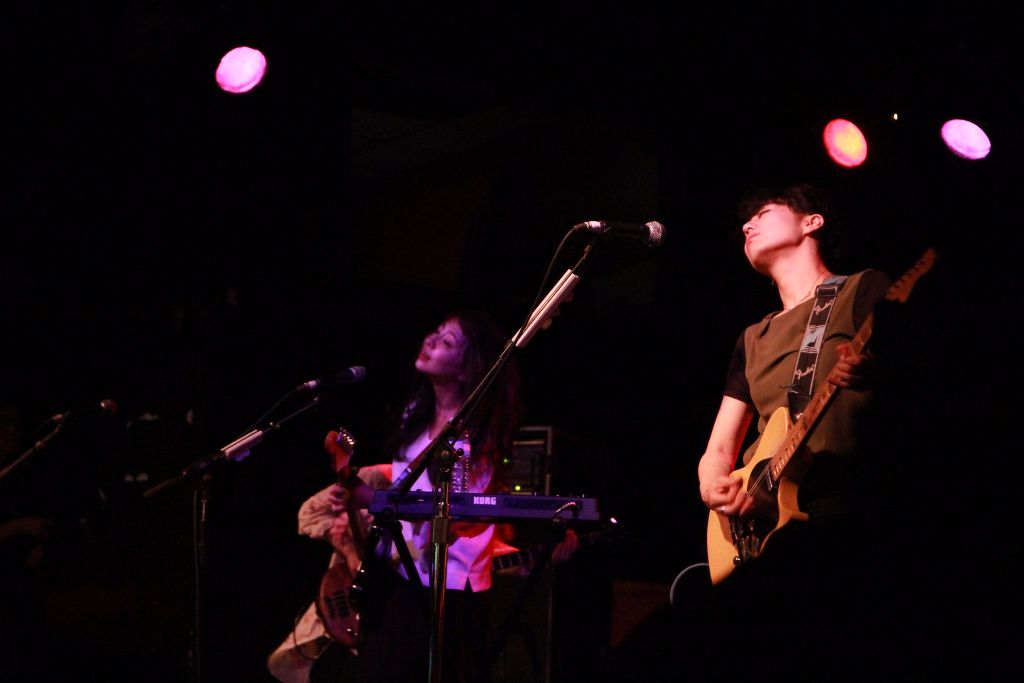 The ladies of Yubisaki Nohaku play for a sold out house at Lee’s Palace
Photo: Hotta Masatomo

The first act to take the stage was Yubisaki Nohaku, a four-piece post-rock group Tanaka called in his introduction, “one of the best female rock bands in the world”. Having formed the better part of a decade ago, their comfort on stage was instantly recognizable. Junko Kimura, their lead guitarist, would later tell me this was their first time playing abroad, but you’d never know it as she summoned a drink from the crowd. “She’s a crazy girl”, said Kana Shimizu, the group’s vocalist, after a knowing laugh. With her blessing, we were all crazy girls. The audience broke out into cheers of “Chug! Chug! Chug!” and the pre-show jitters disappeared not only from the faces of the rest of the tour’s lineup, but from Tanaka himself. In an instant, he had appeared behind them and flew into the crowd, who hoisted him into the air like the hero many knew him to be. Yubisaki Nohaku’s pristine vocals—summoning images of early-noughties legend Chisako Mikami—and infinitely catchy melodies were the perfect introduction to the events at hand. Yumiko Takeuchi, the group’s drummer, and Yuko Miyakoshi, on bass, would take their boundless energy from the stage and into the audience, becoming fixtures in and above the crowd all week long.

At the last iteration of Next Music from TOKYO, Tanaka surprised many by inviting idol group Maison Book Girl, a far cry from the hard rock acts typically in attendance. They can’t have been an easy sell to the usual audience. Yet, to the surprise of none in the know, the girls came out swinging with a jumping set more than worthy of Canadian adoration. This time around, Yukueshirezutsurezure—or Not Secured, Loose Ends, if you’d prefer—would be the idols du jour. “They usually play with a live band, but I was too cheap to fly them all down”, admitted Tanaka, to laughs from the crowd. Their hardcore fans lined the front row, carrying an arsenal of glow sticks. While my exposure to Yukueshirezutsurezure coming in had been nought but Tanaka poking fun at their inability to correctly spell Toronto on Twitter, their performance was no laughing matter, and I’ve got the bruises to prove it. The paradox of their piercing cries and adorable harmonies caught me off guard, and I was quickly washed away by a tide of torsos. The pig-tailed and spritely Shidare surprised me most of all as she dove into the mosh pit—microphone in hand—and personally demolished any idol naysayer’s expectations.

Perhaps the most well-received act of the tour was The Taupe, and it’s not difficult to pin down why. With a sound bleeding between shoegazing and post-punk with a consistent psychedelic flair, the versatile and commanding voice of vocalist Yuki Kawamoto transcended genres and took an unprepared crowd into nirvana. The bombastic tone set by stoic drummer Shouhei and playful bassist Emi Onodera was the ideal backdrop to Kawamoto’s unhinged sexuality. Headwalking through an Earth-shattering rendition of their track “HADO-KEN“, Kawamoto brought an intensity reserved for the greats. Lead guitarist Neil Patti Patti Patti—living up to his name—showed particularly unreal flexibility and skill, with a pedal-board in tow that, according to Tanaka, “easily exceeds Air Canada’s weight restrictions”. To an audience mourning the passing of seminal grunge superstar Chris Cornell just two days before, the warm reception The Taupe received was markedly similar to stories echoing the streets of Toronto about the first time we’d seen Soundgarden, here at Apocalypse Club back in 1989. It’s no exaggeration to say that something really special happened at The Rivoli, and the crowd pouring out on to Queen Street for an almost post-coital cigarette was testament to that. Passersby stopped to ask, “What was that?” and “Who just played?”. One particularly exhausted man said back, “I don’t know, but they were incredible”.

Next on the docket was Hyacca, and being the only act on the roster returning to Next Music from TOKYO for a second run, they should have had an easy time. Still, the audience seemed worn out and ill-prepared to buy what Hyacca was selling. This battle-hardened, challenging post-punk act boasts unusual time signatures and are a stark contract to the more digestible, almost pop sensibilities of The Taupe. While each act seemed to change something about their set going into the second night, it was definitely Hyacca who made the biggest changes. While their Friday set was overshadowed—sandwiched between a mind-blowing hump and the grand finale—Hyacca instead closed out the Saturday show, and with an unbelievably loud tour de force that had my ears ringing for days. The resounding pulse of frontwoman Hiromi Kajikawa’s shakuhachi—a traditional Japanese end-blown flute—left the crowd at Lee’s Palace with a permanent case of tinnitus. Drummer Kimihiro Sasaki’s riotous pulsations had the stage lights shaking almost as violently as the mosh pit. These over-40 rock gods pushed back at their Friday reception—and at The Taupe—and reminded us all why Tanaka conducts this tour in the first place. Raucous cries for a second encore from Hyacca—after Kajikawa broke her guitar during the first—were met with silence. The venue’s audio engineer had pulled the plug, and our time together had come to an end. 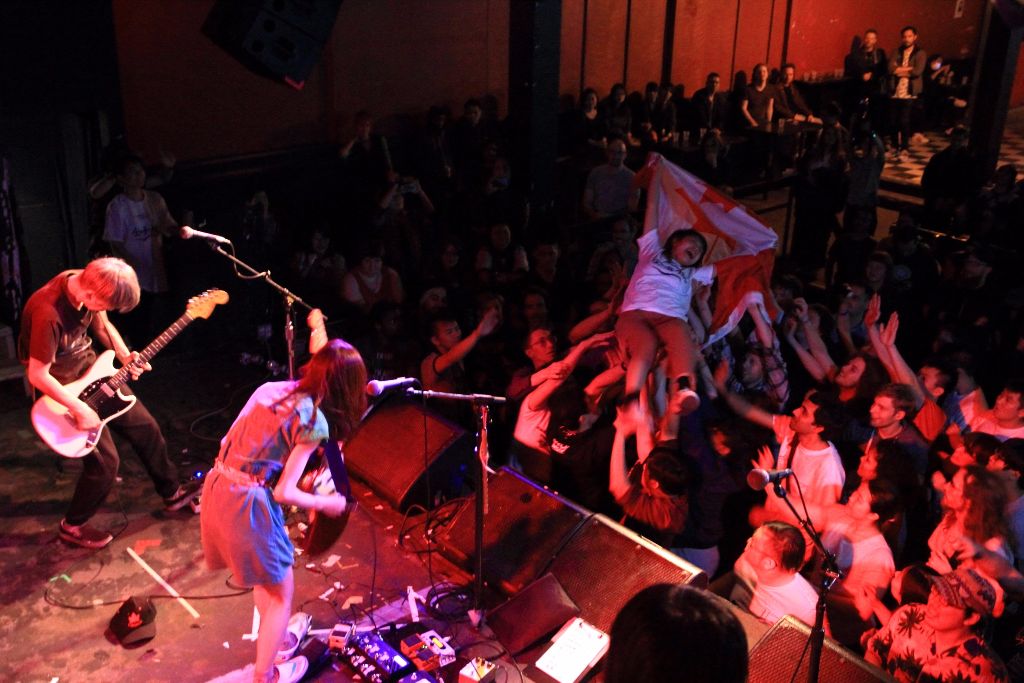 Hyacca wraps up the Toronto leg of Next Music from TOKYO Vol. 10
Photo: Hotta Masatomo

Closing out Friday was Bakyun the everyday, and a seemingly nervous Tanaka attempted to set expectations low. “These guys are actually my friends”, he said to an apprehensive crowd. “Be nice to them!” Despite this, myself and a few others knew better. Bakyun the everyday had gained some indie notoriety after making it to the finals of SSTV’s Day Dream Believer battle-of-the-bands contest early last year. This was the group I was most excited to see. My hat and jacket were off, my camera was tucked away safely in my bag, and I was ready to get transported. The speedy pop-punk stylings of Nobumi Nanamure and fellow guitarist/vocalist Yuji Ino absorbed every last bit of energy the audience had to give. This crowd, a coat of many colours to be sure, was suddenly united. Nanamure’s undeniable charisma somehow managed to eclipse that of even ultra-cute Yukueshirezutsurezure. “I am very, very, very happy!”, she said often to the crowd, who grew closer to obsession with every awkwardly placed adverb. While many acts had attempted in vain to get the English-speaking audience to sing along with them, Nanamure effortlessly had the entire venue screaming, “Bacchikoi!”. Ino had apparently caught a nasty virus shortly after arriving in Canada, but his voice and enthusiasm were unfazed, and his unrestrained thrumming was lost on no one. Bakyun the everyday truly left their hearts in Toronto, and a long lineup of converted fans could be seen waiting for autographs, handshakes, and photos.

This being the 10th iteration of the tour, Tanaka seems to have gotten it down to a science. It’s not difficult, then, to see why the lineup gets increasingly obscure. As the operation becomes more routine, Tanaka is able to use the tour’s reputation as a means to dig further into the underground. Indie darlings and Victor Entertainment signees Ame no Parade were apparently on the shortlist, but the lineup eventually featured a band without so much as a Twitter account. Excited promises from Tanaka about a group that will be playing their first ever show not in Japan, but in Toronto at Next Music from TOKYO Vol. 11 this October, convoked cheers from a sold out crowd, proving this tour is long past the point of needing additional publicity from a flavor-of-the-month. Yet, even after the incredible reception of Friday’s show, Tanaka could be seen wandering through the Saturday venue, stressing over the size of the crowd as—unbeknownst to him—security outside scrambled to funnel eager concertgoers through an unexpectedly long and boisterous line. Canada seems hooked on this bi-annual, veritable who’s that of hidden Japanese talents, and while I’m not sure how one could top the stellar lineup on display with Vol. 10, Steve Tanaka—ever the staunch perfectionist—is sure to try.