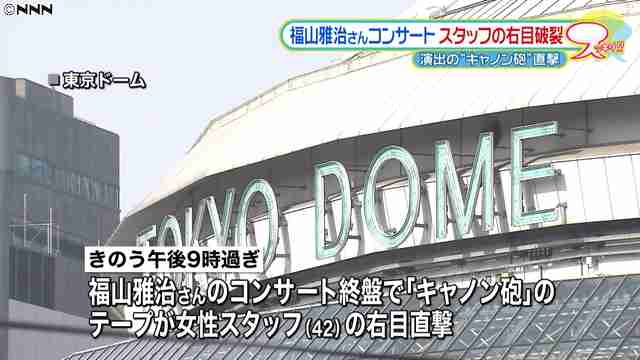 Earlier this week, there was an accident at a Masaharu Fukuyama concert that resulted in a woman’s eye rupturing.

According to the Tokyo Metropolitan Police Department, at 9PM towards the end of his concert set while the Fukuyama was performing at the Tokyo Dome on the 25th, confetti streamers that were fired through a cannon as part of the show’s special effects production. The said streamer struck a 42-year-old female staff member, leading to a serious injury that ruptured her right eye.

It is assumed she will be blind as damage to the posterior segment of the eye is associated with a very high frequency of permanent visual loss. Prompt ophthalmologic intervention are essential to maximizing functional outcome.

Tokyo Metropolitan Police Department suspects professional negligence by those in charge of the launching device that lead to the injuries, and an investigation is currently being held.

Fukuyama Masaharu took to his website to explain the situation and apologize:

During the concert, those responsible for the special effects equipment behind the scenes accidentally injured a staff member in her right eye. immediately after the accident, the staff member was taken to the hospital and is currently undergoing treatment. Although there are strict safety regulations [for this equipment], an accident still took place. In the future,management will pay closer attention to prevent such incidents from happening again. I am extremely sorry to make everyone worry.

But as a performer, the show must go on. His performance schedule continued as normal.