Actress Non (Rena Nounen) will be the new face of HADA LABO in China. HADA LABO is a very popular Japanese skincare line, quite renowned for their lightweight moisturizing products.

The collaboration was initially announced a week ago, but only in the past few days has it started to make waves in Japanese headlines. 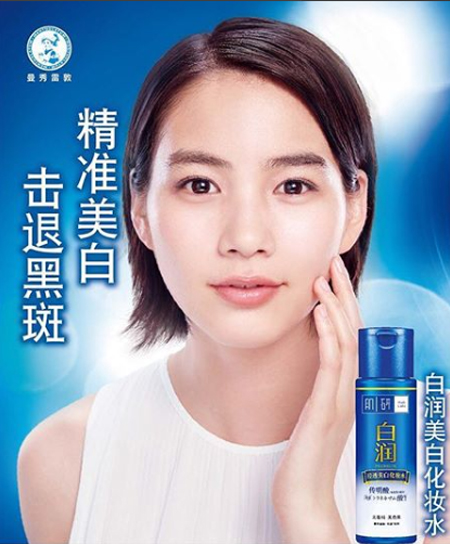 Non was one of Japan’s most promising actresses, starring in many hit drama series and films including “Princess Jellyfish”, “Amachan”, and “By Rule of Crow’s Thumb”. After 2014 her acting roles became much more sporadic.

Her last acting film role was providing the voice for the main character in the animated feature “In This Corner of the World”, and her last drama role was over 4 years ago appearing in the 2014 reboot of “Yonimo Kimyōna Monogatari”. In July 2016 she announced that she would be changing her professional stage name from Rena Nounen to “Non”.

Many tabloids alleged that Non had serious conflicts with her past agency, and was possibly even a victim of brainwashing. She signed to her own private office in 2016 upon the announcement of her new stage name.

Non’s past acting work garnered her quite a following in China, “Amachan” in particular was quite a hit there. It isn’t very often a Japanese celebrity makes it really big in China, but Non might be on her way to becoming the next big thing over there.

Some Japanese media suggested that Non has a similar face to Noriko “Nori-p” Sakai, an idol who got her start in the late 80s and became immensely popular in China, Taiwan, and Hong Kong. Sakai’s name generally always comes up every time a Japanese celebrity does activities in China.

Her HADA LABO campaign is aimed at China, but will also appear in the Hong Kong, Macau, and Taiwan markets. Her face is currently plastered all over the countries in ads.

This high profile campaign has fans hoping that Non will sign on to do another drama series, or start actively acting in films again.